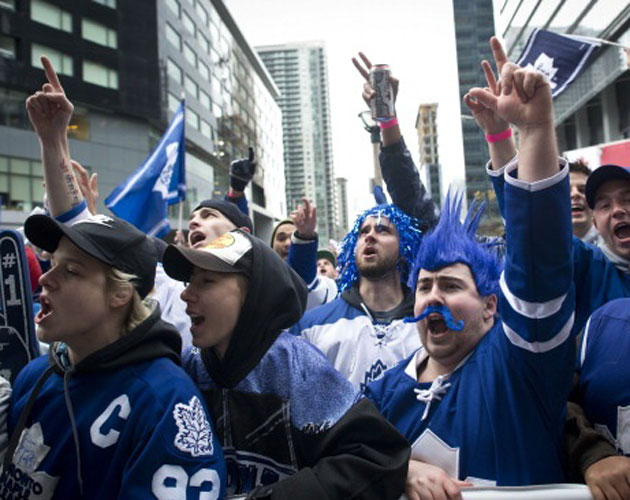 It’s Game 7 of the NHL playoff series between the Toronto Maple Leafs and Boston Bruins. Winner moves on to the next round and  more drama and excitement. Loser spends the summer agonizing over what went wrong.

That’s why there’s always so much tension in these series-deciding games, probably more so for the fans than the players. The arena will definitely be rocking, especially in Boston where fans like to come the games a little lubricated. Toronto has already won two games in Boston in this series, so it doesn’t seem like they’ll be easily intimidated by crowd noise.

So who’s got the edge in this Game 7? The battle-tested Bruins or the just-happy-be-here Maple Leafs?

Boston, a veteran team, has been through so many Game 7s. Expect them to play their normal, plodding game, relying on solid defence and the timely goals. Their first line has scored almost all the goals this series so they’ll need contributions from their secondary scorers – Tyler Seguin, Brad Marchand, Patrice Bergeron – if they’re going to have a hope in the game.

Toronto’s lineup has little or no experience in these pressure-filled playoff contests.  You’d think that would give Boston a huge edge – but maybe not. This youthful Leaf team has an energy about them common among inexperienced teams. No one expected them to take this first round series to seven games. In essence, they’re playing with house money: they may not feel the pressure and continue to play well above their heads. Coach Randy Carlyle will certainly feed off this vibe in his pre-game talk.

The other plus about having youth on your side is the energy factor. Boston has looked old and tired in their past two losses. Zdeno Chara, the hulking defenceman, has logged an awful lot of minutes and may be wearing down. If Toronto gets up a couple of goals like they have in the previous two games, it’s doubtful whether the Bruins will be able to muster the will or the energy to manufacture a comeback.

For the goaltenders, the pressure will be immense. One bad goal – always a morale killer in Game 7 – could mean the difference between an extended playoff run or a hasty exit. Boston’s Tukka Rask has played well in the series but hasn’t stolen a game for the Bruins. He’ll need to be better in Game 7. Toronto’s James Reimer has had a couple of solid games to boost his confidence. He’ll need to maintain this level of play – any regression from the Toronto keeper will be almost impossible hard to overcome.

It’s really too close to call but I’ll go with Toronto to pull of the upset. I suspect their young legs have just a bit more jump left in them than the older Bruins. Look for the Boston to get off to a flying start in the first period. If Toronto can weather the early storm, it’s their game to win.

It’ll be close but I suspect you’ll hear a lot of car horns honking in Toronto tonight.