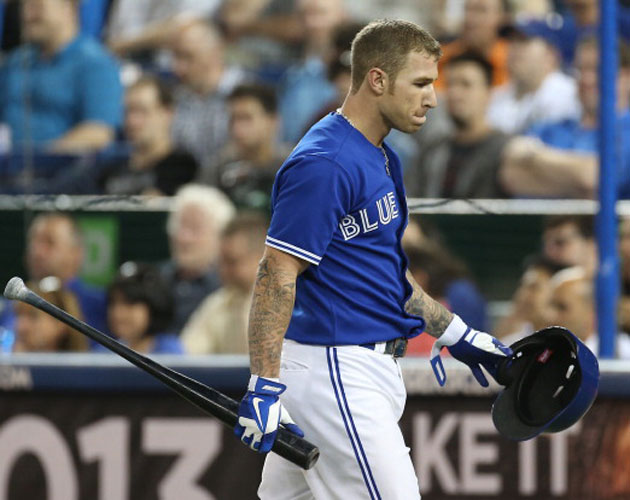 Another day, another meltdown for Toronto Blue Jays’ third baseman Brett Lawrie. Despite the fact the Jays beat the Baltimore Orioles, it seems the talented but perhaps too intense Canadian just can’t stay out of trouble.

But unlike previous blowups, which involved clashes with umpires (see here and here), this time Lawrie took his legendary hot temper out on his own team.

Here’s the scene. The Jays were trailing the Orioles in the ninth with runners at first and third. Lawrie hit a fly ball that Adam Lind, the runner at third, might have tagged and scored. However, the slow-footed Lind stayed put at third, which drew the ire of Lawrie, who felt he could easily have beat the throw to the plate. The fact that Lind held, meant Lawrie was denied an RBI.

As Lawrie exited the field, he cast a death stare at Lind and third base coach Luis Rivera for not attempting to score, a move which Toronto Star blogger Richard Griffin said made Lawrie look like: “a petulant selfish fool.”  Oriole broadcaster Jim Palmer noted of Lawrie: “There goes a guy who cares only about the RBI. Well, let me tell  you son, that run doesn’t matter.”

As if showing up his own teammates wasn’t bad enough, when Lawrie returned to the dugout he became embroiled in a verbal jousting match with manager John Gibbons and had to be cooled down by teammate Jose Bautista.

“No big deal,” said Gibbons after the game. These sorts of incidents happen all the time during baseball’s long season of ups and downs. And, with the Jays struggling to catch the division leaders, tempers are always on the edge of flaring. Still, Lawrie should have shown a bit more class. He must realize that the coach’s move to hold Lind was not only the correct one but was done to put the team in a position to win the game, which they eventually did.

In Lawrie’s defence, he’s still young (witness his since-deleted tweet on @blawrie13 where he castigates fans for booing him: “All u people who chirp when things don’t go good have never done anything in pro sport .. Ever .. So shut ur mouths #LetsGetThisThingg #jays”)

He’s also very emotional and plays the game with an intensity that resembles that of a hockey player. But that doesn’t mitigate the fact that he’s got a lot to learn about sports etiquette.

Baseball has a strict code of behaviour that says you can get away with this kind of behaviour only as long as you’re hitting homers, getting on base and playing at a consistently high level. Lawrie isn’t doing any of those and until he starts, it would be nice if he would just shut up and play.