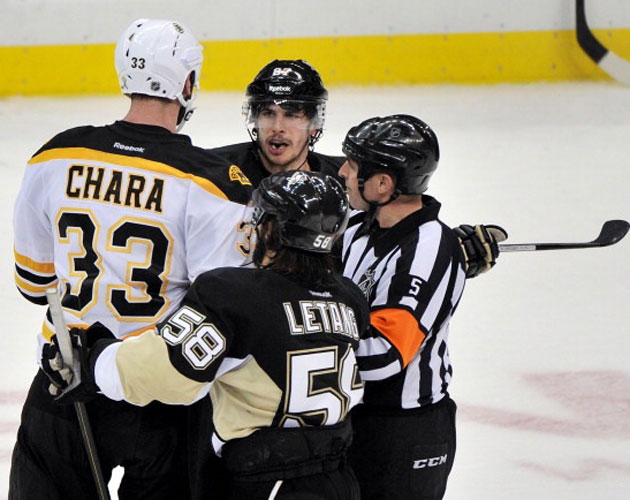 The Boston Bruins are once again rolling along merrily toward the Stanley Cup Finals. As in 2010, they’re employing the same strategy that worked so well last time: great goaltending, timely scoring and an uncanny penchant for getting under the skin – and into the heads – of the opposition’s star players.

Two years ago, the victims were the Vancouver Canucks, in particular the Sedin twins – Henrik and Daniel – who repeatedly lost their cool and began worrying more about complaining to the referees about the dirty play of certain Bruins than focusing on scoring. And we all know how well that turned out for Vancouver.

This year, it’s the Pittsburgh Penguins who are falling prey to the same annoying Bruin tactics, star forwards Sidney Crosby and Evgeny Malkin in particular. In Saturday’s 3-0 Bruin victory, Crosby was held pointless, took two penalties and got embroiled in several heated exchanges with Bruins’ giant defenceman Zdeno Chara. Malkin also lost his cool, becoming so frustrated, he dropped his gloves and fought with Patrice Bergeron, earning a five-minute penalty. As the saying goes: you can’t score while sitting in the penalty box.

Both Crosby and Malkin spent the rest of the game complaining to the refs, shades of last year’s playoff loss to the Philadelphia Flyers. “It was pretty emotional, and we get into it a little bit,” Crosby told NHL.com. “But that’s not something we go out there looking for – that’s more of a result of the way the game kind of escalated.”

The problem is, any game against the Bruins always seems to “escalate”. They’ve got big, tough and talented players who all seem to be able to score, fight or agitate. And the Penguins stars are going to have to rise above this, stick to hockey and ignore the chippy stuff or this series is going to get away from them in a hurry.