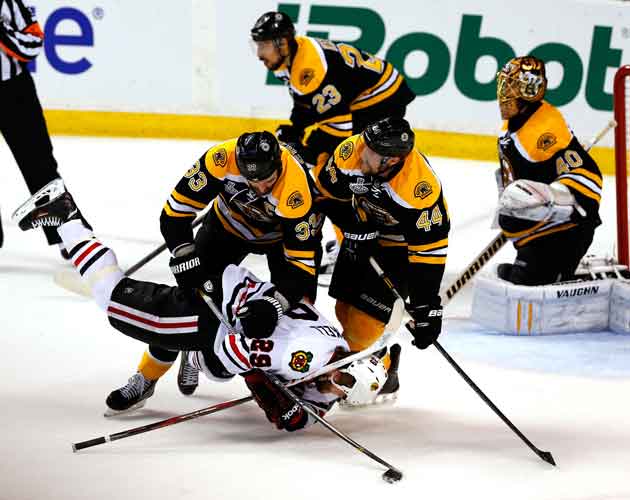 The Boston Bruins not only won Game 3 of the 2013 Stanley Cup finals over the Chicago Blackhawks on the scoreboard, they also won it in the trenches.

The big and mean-spirited Bruins are shutting down the skilled Hawks’ forwards with a combination of intense defensive play and old-fashioned bullying, a reprisal of the strategy that worked so well for Boston when they won a Stanley Cup in 2010, completely intimidating the Vancouver Canucks.

Led by Milan Lucic, Zdeno Chara and Johnny Boychuk, the Bruins hit, slashed and generally intimidated the Chicago forwards, who for much of the game seemed like scared and unenthusiastic combatants, content to stay on the periphery and avoid the tough-going in front of the net. It seemed that any time a Chicago forward tried to get open, he was immediately swarmed by a gang of gold and black clad players, and meekly dumped the puck behind the net or, worse, gave it away creating an odd-man rush for the Bruins.

While Chicago has some big forwards, they can’t match Boston in the physical department and are beginning to wear down and play scared. And like Game 2, Jonathan Toews and Patrick Kane – two Blackhawk superstars – could not generate any real scoring opportunities. This meant Bruins goalie Tuuka Rask had an easy time of it, earning his second consecutive shutout on home ice.

And with Chicago sniper Marian Hossa out of action with an undisclosed injury, it doesn’t look like Chicago has much of a chance to climb back in this series.