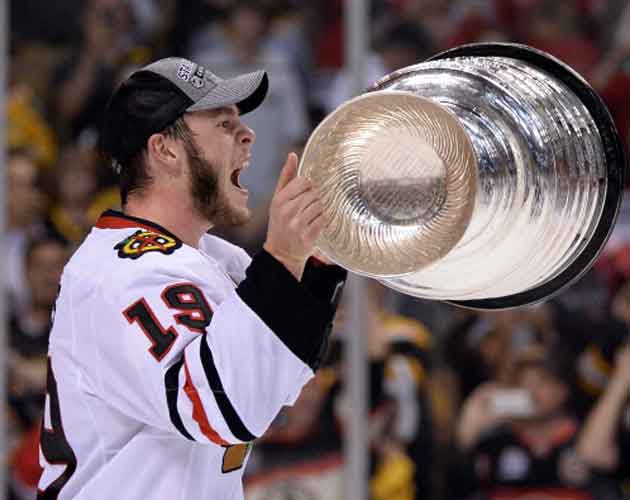 The final game of the 2013 Stanley Cup finals was one for the ages as the Chicago Blackhawks somehow, someway managed to steal Game 6 against the Boston Bruins, giving the team its second Cup in four seasons.

Outplayed much of the game, the Hawks somehow managed to score two goals in the final minute to snatch a thrilling victory from almost certain defeat. What goes around, comes around: it was karmic payback to Boston, who had done the same thing to the Toronto Maple Leafs two rounds earlier.

The Bruins, who had physically dominated the Hawks all game, were sailing along comfortably until Brian Bickell scored late to tie the game. Then Dave Boland scored 17 seconds later on a rebound, shocking the raucous Boston crowd and leaving the shell-shocked Bruins with just a minute left to tie the game.

Boston pulled the goalie but couldn’t muster a single shot in the last minute and the Hawks jumped off the boards to celebrate their stunning victory. In a nice gesture after the game, Chicago captain Jonathan Toews lifted the Cup and then handed it off to some of the veterans on the team, players who have put in a lot of years and finally experience their first title.

The victory marked the culmination of a magical season for Chicago, which got off to such a rapid start with 24 games without a loss, survived a scare in the second round of the playoffs against Detroit Red Wings, and had just left enough in the tank to beat the Bruins.

The Bruins put up a game fight but scorers Patrice Bergeron, Nathan Horton and Jaromir Jagr and an overly fatigued Zdeno Chara, who had a miserable Finals, was disastrous for the Boston. Boston players now know how the Toronto Maple Leafs felt earlier in the playoffs, when they blew a 4-1, Game 7, third period lead to the Bruins. Goaltender Tuuka Rask, gracious in defeat, pointed that out: “We’ve done it to somebody else, so we got to feel how it feels being on the other side,” said Rask.

Patrick Kane, who won the Conn Smythe as playoff MVP, summed up the feelings of all the Hawks. “This year we had a great team and we really followed through. Being down 2-1 in the last couple of minutes, coming back and winning in regulation, it’s just unbelievable, this team.” Coach joel Quenneville agreed. “It was one of those seasons, a fairy-tale ending and an amazing season.”