Toronto Blue Jays 2013: Where did it all go wrong? 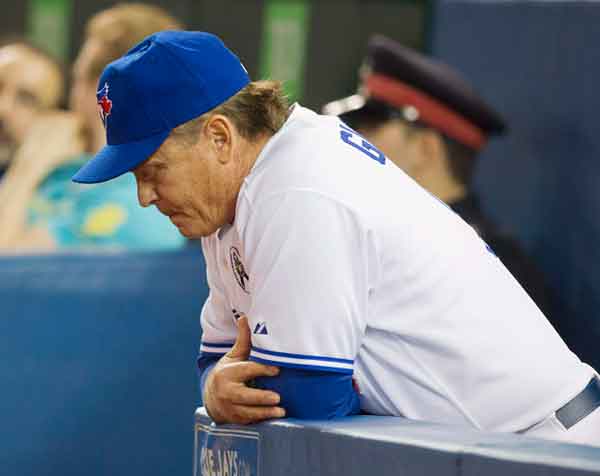 The 2013 season, which started out with such promise, has become a horrific nightmare for Toronto Blue Jay baseball fans. Sportswriters and Vegas bookies all had the Jays as odds-on favourites to make it to the playoffs, if not win the World Series.

Instead, the team has lurked near the bottom of the standings all year and has played very poorly against the to American League teams. Manager John Gibbons described a recent loss where the Jays committed five errors as “crappy.” No doubt he’d use a similar adjective to describe this whole messy season.

Team management must be hoping this year’s performance is an outlier, and that the team will rebound in these categories next year. One can only hope.

So what went wrong? By looking at some of the key areas that make for a winning baseball team, it’s easy to determine why this team has been such a disaster this year.

Strong start: The team was hoping to get off to a quick start to keep up with the other powerhouses in the American League East. They did they exact opposite, losing early and falling well out of contention by mid-May. Following the All-Star break, the players remained optimistic, pointing out that if they started the second half well, anything could happen. They went 0-6. It’s now almost impossible for this team to get back into contention.

Pitching: A hallmark of all winning teams, pitching was thought to be an area of strength for the Jays. They entered the season with a staff bolstered newly acquired Josh Johnson and Mark Buehrle from the Miami Marlins as well as knuckleballer R.A. Dickey, last year’s Cy Young-award winner, from the New York Mets. Johnson has been an absolute wipeout, going 1-6 with a 5.66 ERA and a woeful 83 hits allowed in only 68 innings. Buehrle’s been OK, not great, and Dickey’s subpar season has been highlighted by the amount of homeruns he’s given up. And because the starters have been routinely knocked out of games early, the bullpen has logged too many innings. They’re starting to show the wear-and-tear, and giving up runs in bunches, something they hadn’t done earlier in the season.

Winning at home: Every good team needs to win at least 65 to 70 per cent of their home games and then hope to play break-even on the road. The Jays are just below .500 at home but 8 games beneath the break-even point on the road. That’s not going to get it done.

Winning streak: Every playoff club gets hot at some point in the season, producing lengthy winning streaks to distance itself from the field. In June, the Jays seemed to be on track, rolling off 11 wins in a row, closing the gap between the league leaders and showing off the best record in baseball for that month. Something to build on, right? Not so much. They followed that winning streak up by going 3-8 in their next 11 games, and blowing any chance of getting back in the race.

Power: This is one area where the Jays have lived up to their pre-season billing. The team hits a lot of home runs, second in the American League, in fact. They just don’t seem to do it with runners on base or in crucial situations.

Timely hitting: Another disaster area for the Jays. While this team hits homeruns with the best of them, it flails miserably with runners in scoring position. Add to the mix they have two players (centrefielder Colby Rasmus and catcher J.P. Arencibia) who have both struck out over 100 times, and it’s easy to see why a lot of promising scoring situations die on the bases. In almost every game, it seems, they succeed in getting the tying run into scoring position – but just can’t get a hit to drive it home.

Defense: No one thought this team was loaded with gold-glovers. But they were expected to play solid, fundamental defence in support of the pitching. That hasn’t even remotely been the case. The Jays have been plagued by sloppy play, untimely errors and a general defensive malaise leading to the opposition extending innings and scoring unearned runs. Arencibia, who’s becoming a beacon of fans’ wrath, is near the top of the league in errors and passed balls and has shown a marked inability to throw out baserunners.