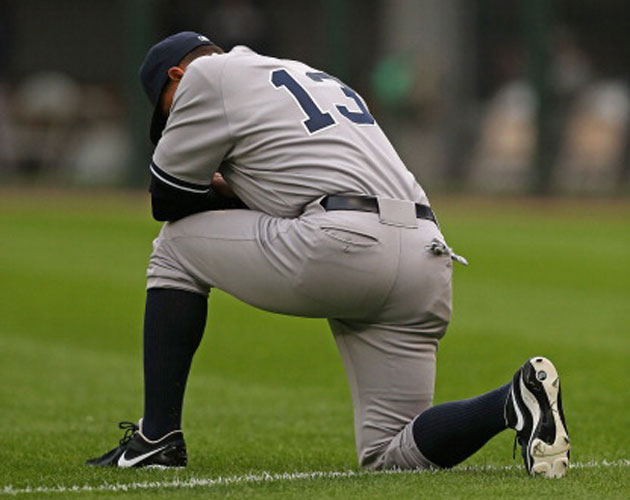 Major League Baseball has suspended 13 players for using performance-enhancing drugs but judging by the way the sports world is reacting, you’d think New York Yankees third-baseman Alex Rodriguez was the only one who cheated.

Across baseball, baseball announced suspensions for 13 players who purchased performance-enhancing drugs from the Biogenesis Clinic in Florida. Twelve of them received 50-game suspensions. A-Rod’s penalty? 211 games – over four times harsher than the others. It means he won’t be able to play until the 2015 season.

Obviously, commissioner Bud Selig has chosen Rodriguez to be the primary fall guy in baseball’s efforts to eradicate the use of PEDs. In striving to clean up baseball’s image, he went after the biggest fish and landed it. According to MLB.com, here’s how Selig justified one of the longest suspensions ever handed down in pro sports: “based on [Rodriguez’s] use and possession of numerous forms of prohibited performance-enhancing substances, including testosterone and human growth hormone, over the course of multiple years.” The suspension also takes into account the fact A-Rod tried to “cover-up his violations of the program by engaging in a course of conduct intended to obstruct and frustrate the Office of the Commissioner’s investigation.”

As everyone expected, the 38-year-old A-Rod appealed the suspension and will be allowed to play until he gets a hearing. His decision to appeal has only increased the level of wrath media and fans hold against the former MVP, prompting Christine Brennan of USA Today to compare him to the “party guest who won’t leave.”

Why so much hatred for A-Rod? It’s partly stoked by the fact that the 12 other suspended players all accepted their penalties, apologized to fans and management and didn’t make excuses. A-Rod, on the other hand, will stick it out to the bitter end because he’s “fighting for his baseball life” and “has to defend myself” because “no one else will.” That includes the New York Yankee management, which stands to save a lot of money if the highly paid third basemen is suspended for what amounts to a season-and-a-half worth of baseball games.

Certainly, A-Rod has always been a lightning rod for fan hatred and always seems to make the most wincingly wrong PR moves. His huge success at the plate, massive salary, celebrity romances and general arrogant attitude made him the target for boos at most opposing stadiums. But even on his home turf he’s barely tolerated – his post-season struggles, declining numbers and questionable behaviour (both on and off the field) have earned him the enmity of Yankee fans. Rightly or not, he has become the anti-Derek Jeter and epitomizes everything that’s wrong with baseball. Few can forgive him for that.

So now this once great player who, had he played his cards right, could have set all the records and earned the undying adulation of the entire sports world, winds up his tarnished career as a pathetic figure, unloved by fans, detested by Major League Baseball and unwanted by his own team. He had all the talent in the world but wasn’t satisfied. So, in an effort to achieve immortality, he took illegal substances which ultimately led to his downfall. There’s a moral in here somewhere.