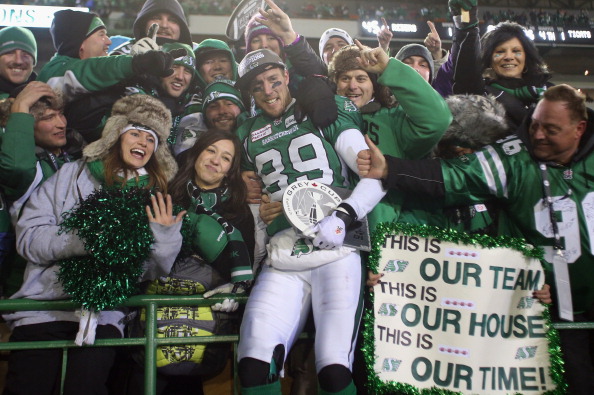 It was fitting that Saskatchewan Roughriders won the 101st Grey Cup, defeating the Hamilton Tiger-Cats in a 45- 23 blowout.

Fitting because the game was played outdoors in the frigid Regina – the heartland of Canadian football – in front of best CFL fans in the country, 45,000 crazed, green-clad loyalists who didn’t seem to mind the cold, as long as their beloved home-town Riders captured the Cup.

“The one thing that led us to a dominant performance was that the fans were unreal,” Roughriders coach Corey Chamblin said. “It was unreal. From pregame warmup I knew it was going to be tough for those guys. I looked at them and said ‘I wouldn’t want to be in your shoes.’ I mean, it was ridiculous. The whole thing was green.”

And the hometown football team more than delivered for its fans. The game was all but sealed in a wild second quarter, that saw the Roughriders score 24 points against a stunned Tiger-Cat defence. The assault was led by Saskatchewan running back Kory Sheets, who ran for a Grey Cup record 197 yards and two touchdowns and quarterback Darian Durant, who overcame two early fumbles to put up a sterling statistics, 17-24 passing for 245 yards.

Hamilton seemed off-balance right from the start, unable to move the ball with any consistency on offence or stop anything Saskatchewan threw at them on defence. Although they did manage to pull within 15 points by the fourth quarter, the result was never really in doubt.

Tom Hanks made a surprise appearance at the game, showing up as a guest of his good buddy Martin Short, a life-long Tiger-Cats fan. Hanks chatted and posed for pictures with ‘Rider fans and at one point drew a standing ovation when he donned a ‘Riders toque on the Jumbotron. Hanks and Short even broke out the Ticats’ famed “Oskie Wee Wee” chant before the game.