The last days of Hockey Night in Canada 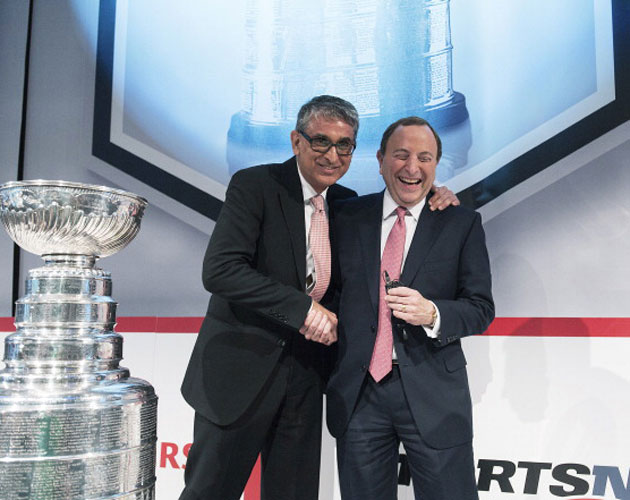 Rogers' CEO Nadir Mohammed and NHL Commissioner Gary Bettman share a laugh as they gloat over a new TV deal that might mean the end of Hockey Night in Canada.

Should Don Cherry start dusting off his résumé? Will Ron Maclean be relegated to hosting Battle of Blades? Can Rogers Communications succeed in its quest to snap up every sports-related property in Canada?

These were just a few of the questions on the minds of hockey fans as the landmark deal was announced that Rogers would pay $5.2 billion  for the rights to broadcast hockey in this country for the next 12 years. The deal will likely spell the end of free over-the-air hockey broadcasts and undoubtedly usher in an era where fans are forced to pay fees to the gargantuan broadcaster for the privilege of watching a Saturday-night game.

The ever-acquisitive media company, which already owns part of the Toronto Maple Leafs and Toronto Raptors and all of the Toronto Blue Jays as well as broadcasting agreements with every sport you can name, baseball, football, soccer, tennis, U.S. college sports, and on and on.

What we’re really witnessing here is the gradual winding down of one of the best enjoyable, free and, dare I say, nation-defining television programming this country has ever produced: Hockey Night in Canada. Since the dawn of television (and before that on radio), each and every Saturday night during the season, millions of Canadians would tune in to the venerable show. While media critics complained that the HNIC brand had gotten stale, it was precisely that trait that ensured its success: to wit, a grandfather could sit down with his grandchildren and derive the same amount of enjoyment out of the show.

RELATED POST: Does fighting have a role in hockey?

That’s all gone now, or soon will be. For the next four years, CBC will continue to run HNIC on Saturday nights (which its been doing since 1952) but they will no longer be in control of the show, nor will they derive any of its revenue. And, Rogers-owned stations will air another game during the sacred Saturday night time-slot. After the four years are up, it’s anybody’s guess what role HNIC will play, if any. For now, “the plan is to have the Stanley Cup final on CBC,” said Keith Pelley, president of Rogers Media. That’s not exactly reassuring news for those who don’t currently subscribe to Rogers.

Hubert Lacroix, president of CBC/Radio-Canada, scrambled to defend the deal, saying the government-owned corporation doesn’t have the money to compete against the Rogers’ monolith. “This is how CBC needs to go forward, with partnerships.” So they get zero ad revenue and give up all editorial control – it’s unclear how this is a partnership.

There was a lot of talk at the press conference about “streaming games on multiple platforms” in order to “give viewers more choice” and other new-media blah-blah, but the real reason could be gleaned in a statement made by much-detested commissioner of the NHL, Gary Bettman, a man who seems bent on single-handedly destroying every long-standing hockey tradition.

“We’re the ones who pitched [the deal] initially,” Bettman said. No surprise there. Explaining the agreement to CBC’s Peter Armstrong, Bettman said:

“It’s never just about price. It’s about brand of rights, it’s about how the games are going to be distributed, scheduled and produced. It was an overall comfort level based on the circumstances as we found them.”

But listen to what Rogers CEO Nadir Mohammed had to say about the deal. “Categorically this is positive for shareholders at Rogers. It’s a financially good deal for us.”