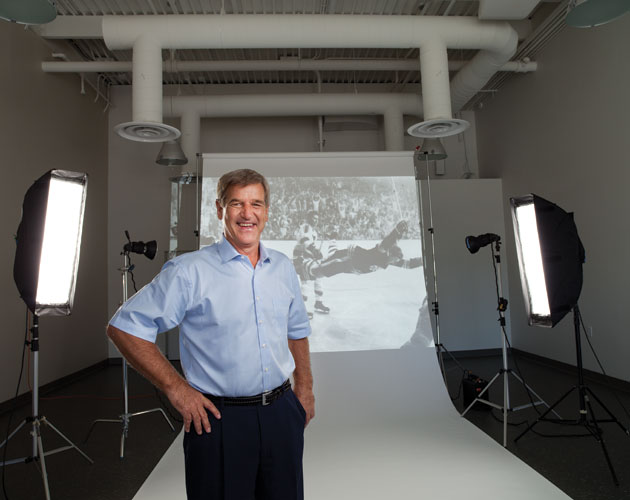 AS EACH OCTOBER rolls around, I wonder if I’m finally getting too old to be excited about the approaching hockey year. Like the kid who believes in Santa Claus too long, shouldn’t I stop watching sports and move on to more grown-up matters, like politics?

This anxiety fades soon after the first puck is dropped or the Toronto Maple Leafs lose their first game. It’s hockey after all, and Canadians young and old have the right – nay the duty – to get excited about watching young men in shorts and stockings chasing a rubber disc around the ice.

Of course, no new season is complete without several new book releases that try to capture some new aspect of our national game. And there are two highly anticipated titles this year: one by the greatest defenceman to ever play the game and the other by a veteran right winger.

After keeping us waiting for decades, Bobby Orr finally releases his memoirs, Orr: My Story (Penguin, October 2013). It’s curious why No. 4 took so long after retiring to pen his thoughts; perhaps he had to let enough time pass before he could deal with the Alan Eagleson experience, the former agent who swindled Orr and numerous hockey players.

Orr’s book shares shelf space with Stephen Harper’s A Great Game: The Forgotten Leafs and the Rise of Professional Hockey (Simon & Schuster Canada, November 2013). It seems our PM is a big hockey fan – it’s one of the few windows into his closely guarded personality that he’ll allow the public to see through. Harper began this labour of love before he landed at 24 Sussex and has since devoted any spare time to researching and writing it.
Politicians dabbling in sports is not a new thing. U.S. presidents since William Taft in 1910 have been throwing out the first pitch to open each Major League Baseball season. Richard Nixon, despite his awkward physical appearance, played college football and even designed plays for the Washington Redskins. More recently, Barack Obama signalled the changing times by putting up basketball nets on the White House tennis court. And when Vladimir Putin skated with the Russian hockey legends, he managed to score the winner against a goalie who was no doubt terrified about the dire consequences he might face should he stop the czar.

Hockey players crossing over into politics isn’t an unheard-of concept either. Frank Mahovlich parlayed his very successful on-ice career with the Toronto Maple Leafs and Montreal Canadiens into the sweetest of all political offices, the Canadian Senate. And over the years, players like Red Kelly, Syl Apps and Ken Dryden made the successful transition from the icy to the political arena.
Which leads us to the interesting question: of all the great hockey players over time, which one would have made the best prime minister?

My candidate, however, would be Bobby Orr. Just look at the photo above: doesn’t he look prime ministerial? Even at 65, he remains the quintessential all-Canadian boy. Not only does he possess all the traits of a great leader but, as is evident in the iconic picture on the screen behind, he has that one superhuman quality that sets him above the rest: only Orr can fly.