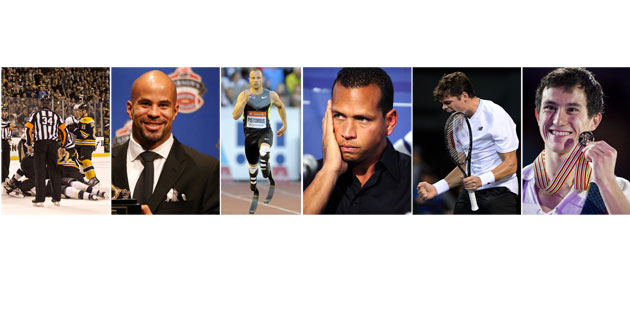 This past year in sports marked a number of breakthroughs for Canadian athletes on the international stage. Ottawa’s Patrick Chan won the World Figure Skating Championships and Thornhill, Ont.’s tennis star Milos Raonic had a superb season on the ATP World Tour, becoming the first ever Canadian to crack the top-10 in rankings.

Raonic’s efforts earned him Sportsnet’s Canadian Athlete of the Year, finishing ahead of golfers Graham DeLaet, of Weyburn, SK,  and bobsledder Kaillie Humphries of Calgary. But Raonic’s accomplishments weren’t enough for him to capture the prestigious Lou Marsh Award, which is given annually to this country’s top athlete. That went Canadian-born running back Jon Cornish, who ran for an astounding 1813 yards last year for the Calgary Stampeders.

Besides these notable individual accomplishments, let’s take a month-by-month look some of the top sporting moments from 2013.

Team Canada’s World Junior team travels to Russia with high hopes but finish a disappointing fourth. The Canadian squad loses the bronze medal game to Russia and returns home without a medal for the first time since 1998. Oh well, for hockey fans the new isn’t all bad: with the NHL strike finally over, the pro season kicks off on Jan. 13, with a condensed 48-game schedule.

In one of the year’s more bizarre stories, Oscar Pistorius, the celebrated South African sprinter (aka Bladerunner) – who charmed us all by becoming the first disabled person to compete in the Olympics – is charged with the murder of his girlfriend Reeva Steenkamp. The incident shocks the world and blows up the Internet.

A big month for athletes who were sequins. Patrick Chan becomes the Olympic favourite by capturing the 2013 World Figure Skating Championships Men’s event, held in London, Ont. Canada scores well in across the board, with Meagan Duhamel and Eric Radford winning Bronze in the Pairs competition and Tessa Virtue and Scott Moir skating off with the Silver in the Ice Dance event.

The world is rocked when the normally peaceful Boston Marathon is thrown into chaos as two home-made bombs explode near the finish line. With three spectators killed and over 250 others injured, the city goes into complete lockdown and the FBI undertakes a massive manhunt, which finally ends when two suspects are identified, one is killed and the other brought into custody.

With the Toronto Maple Leafs comfortably leading the Boston Bruins 4-1 with nine minutes to play in Game 7, Leaf fans begin celebrating in anticipation of Round 2 … but wait. Boston scores. Then they score again. Then, with less than a minute to play, Boston ties it up 4-4. You know the rest, Boston scores in OT, completing the unimaginable comeback and sending Leaf Nation home in disbelief. Relive the meltdown in all its glory.

Another shocking hockey comeback, this time in the Stanley Cup Finals. With the Chicago Blackhawks trailing the Boston Bruins 2-1 in Game 6, it seems all but certain the series will shift back to the Windy City for Game 7. Then all hell breaks loose. First Brian Bickell scores to tie it with 1:16 left to play. Then, David Bolland bangs in a rebound  just 17 seconds later. The ‘Hawks hold on the rest of the way and clinch the Cup, sending the normally raucous TD Boston Garden fans home in stunned silence. Relive the most electrifying finish you’ll ever see in a Stanley Cup final.

Glasgow’s Andy Murray enthralls hometown fans when he becomes the first man from Great Britain to win the Wimbledon Men’s Singles title since Fred Perry in 1936. Canadian fans have their own moments to cheer when Toronto’s 40-year-old Daniel Nestor and partner Kristina Mladenovic pull off an upset to win the Mixed Doubles event.

The ever-controversial baseball superstar Alex Rodriguez is suspended by the league for a whopping 211 games, as a result of steroid allegations and his role in the Biogenesis scandal.  A-Rod immediately appeals his suspension, plays the rest of the season and then sues Major League Baseball, accusing the league of trying to force him out of the sport.

After spending a boatload of money to bring in top-priced pitching talent – R.A. Dickey, Josh Johnson and Mark Buerhle – as well as signing highly regarded shortstop Jose Reyes, the Blue Jays end their season in dismal fashion. With a record 74-88, the playoffs are only a distant rumour for this hugely disappointing team.

Led by a record-setting performance by running back Kory Sheets, the Saskatchewan Roughriders are crowned Grey Cup champs, thrashing the Hamilton Tiger-Cats 45- 23. The win is made sweeter for Rider Nation because it happens on their hometurf, in front of 45,000 screaming, green-clad fans, one of which was Tom Hanks.

The role of fighting in hockey is once again in the spotlight as Boston Bruin’s Shawn Thornton slugs Pittsburgh Penguins Brooks Orpik during a stoppage in play. Orpik – who likes to deal out heavy hits but refuses to fight tough guys (Dion Phaneuf anyone?) – was lying on the ice when Thorton punched him. The Penguin defenseman sustains a concussion and Thornton receives a 15-game suspension from the NHL, which draws the ire of Don Cherry.