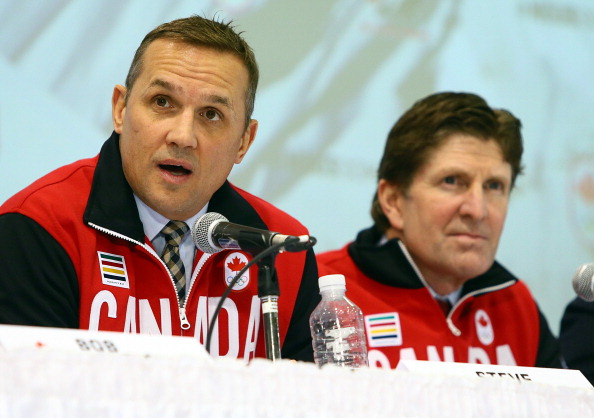 With just over a month to go before the puck drops at the 2014 Winter Games, Team Canada unveils the lineup it hopes can capture hockey gold.

Here’s the team that Team Canada’s executive director Steve Yzerman will take with him to Sochi:

Led by Sidney Crosby, the roster looks a lot like the one that finished in first place in Vancouver. New faces include Mike Smith and Carey Price in goal, Alex Pietrangelo, P.K. Subban, Marc-Edouard Vlasic and Dan Hamhuis on defence and Steven Stamkos, Chris Kunitz, John Tavares and Matt Duchene up front.

The consensus among experts seems to be that no other team can match Canada’s skill and depth at the forward position. And while the blueline lacks a classic big, shut-down defender (a la Chris Pronger), it still has  plenty of firepower and should be able to move the puck out of the zone.

The big question marks for Yzerman and coach Mike Babcock will be in net. If it comes down to a goaltending battle, Roberto Luongo’s play of late does not inspire anyone with confidence. Should Luongo fail, will Mike Smith or Carey Price – neither of whom have been tested on the world stage – be able to make the big stops the team will need to win gold?

Playing out of Group B (along with Norway, Austria and Finland) Canada’s first game will be on Feb. 13 against Norway. Each game begins at noon ET.