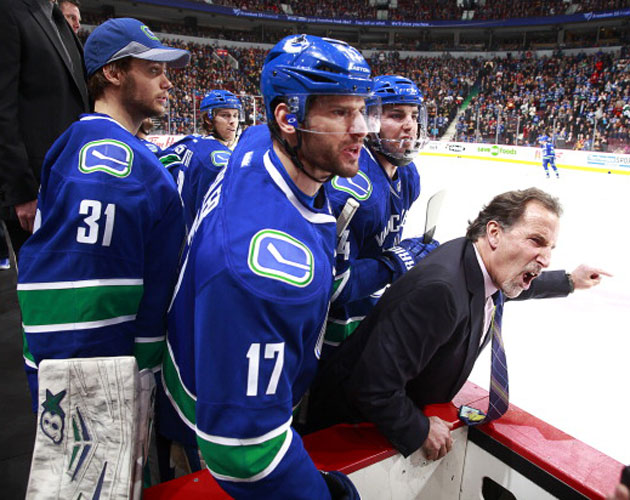 Highly strung coaches losing their minds in front of cameras is not exactly a novel occurrence in the sporting world. Screaming at officials, blowing up at stupid questions during press conferences or publicly berating opposing players and coaches: it’s all part of the hugely stressful job of guiding a professional sports team.

At first glance, temporary insanity might seem like an adequate explanation behind Vancouver Canucks coach John Tortorella’s bizarre rampage during a recent game against the Calgary Flames.

Just another case of a volatile coach blowing his stack against an opposing coach, you say? On closer examination, however, it appears there was probably a lot more method to this coach’s madness.

For those who missed it, Tortorella’s explosion was ignited after Flames coach Bob Hartley put all of his tough guys into the starting line-up, forcing Tortorella to follow suit and start his own scrappers. Two seconds after the puck was dropped, the inevitable happened – five fights broke out simultaneously, resulting in 142 penalty minutes and eight player ejections.

Tortorella screamed at Hartely for most of the period and then tried to continue the discussion into the Flames’ dressing room after the period ended. Cameras captured (see above) the incensed Canuck coach amidst a crowd of players, shouting and pushing until the dust finally settled and cooler heads prevailed.

It was strictly garage-league stuff, but highly enjoyable nonetheless. A mid-season game between the struggling Canucks and the pathetic Flames promised to be a real snoozer, but the fights – and the bizarre antics that followed – certainly livened up the proceedings. No one was hurt during the fisticuffs and the Canucks, though short-handed by the ejections, managed to hang on and win an important game. The punishment handed down by the NHL this week seems to fit the crime: for 15 days, or six games.

RELATED POST: DOES FIGHTING HAVE A ROLE IN HOCKEY?

So let’s just chalk it up as another example of Torts being Torts and move on, right?

The problem is that, on this particular occasion, Tortorella’s actions seemed suspiciously over-the-top. While his initial outburst at Hartley might have been warranted (though he conveniently forgets a similar ploy he used while coaching of the New York Rangers), it’s unclear what he had in mind when he tried to force entry into the Flame’s dressing room and what exactly he planned to do when he got there.

It’s more likely that the coach’s frantic foray into the Flames dressing room wasn’t a heat-of-the-moment decision made by a crazy man but the cooly considered move of a coach who wants to inspire some life into his sleepy team. The Canucks have long suffered from a (well deserved) reputation of being a soft team that too often allows the opposition to get away with cheap shots on its stars. Maybe Tortorella was sending his players a message: “I’ll stand up for you off the ice. You stand up for each other on it.”

While it’s hard to gauge the effect such a move had on team morale, the comments below suggest key Canuck players have noticed – and fully support – their coach’s move:

Team management knew exactly what they were getting when they hired the tempestuous coach last summer. They wanted him to instill some of his famous fire into a perennially skilled but mild-mannered club. Come playoff time, we’ll see whether the move pays dividends.