“Put that freakin trophy up again!” 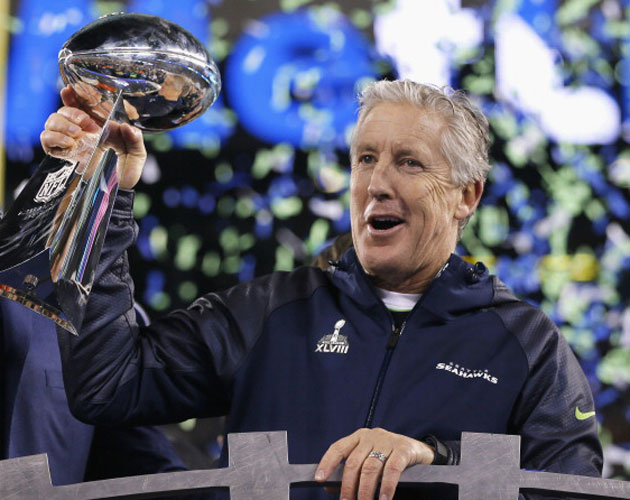 A hoarse, Gatorade-drenched Pete Carroll could barely make his voice heard in the chaos following his Seattle Seahawks Super Bowl victory over the Denver Broncos.

The effervescent coach of Seattle – at 62, the second oldest coach in the NFL – wasn’t quite ready to let his players begin celebrating their astonishing 43-8 victory over the Denver Broncos. Instead, he had one more lesson to impart, one last chance to instill his mantra of positive reinforcement to his players.

After acknowledging the achievements of all his players, especially the mighty defence which had smothered Peyton Manning and the Bronco’s record-setting offence, Carroll asked his players to lift the Lombardi Trophy again.

“As close as we are right now, we will never be separated from this moment. Let’s make sure we always remember that,” he shouted, a huge smile on his face. “There’s something that’s so real about this. Something so much a part about what we do.”

Pure Pete Carroll. This man, you see, is no ordinary football coach. Running up and down the sidelines cheering big plays, hugging teammates, a huge smile always pasted on his impossibly youthful face, he’s a bundle of positive energy.

Unlike other NFL coaches, many of whom favour the drill-sergeant approach – shouting, swearing and demeaning players to get results – Carroll always keeps things positive. A player recently described him as “relentlessly, even absurdly, positive. He’s constant energy. He never stops being cheerful and enthusiastic and encouraging.”

It’s an approach that didn’t always bear fruit. Back in 1999, he was fired as head coach of the New England Patriots, the criticism being that his enthusiastic method wasn’t suited to the league.

Refusing to change his ways, Carroll refined his technique as head coach of the legendary USC Trojans. Here, he built up a truly magnificent program that just kept winning and winning. He was able to develop a bond with his young charges, learning which buttons to push and how to reach them in a meaningful, positive way. No surprise that he became the first college coach to adopt social media, reaching out to young athletes through facebook and later twitter.

He learned what motivated young athletes, many of whom came from tough inner city situations around L.A. He worked all this knowledge into a philosophy which he dubbed “Win Forever”. A website and later a book, Carroll’s credo espouses a curious mix of the power of positive thinking and how to succeed at football aimed at developing “a culture of high performance that is in a relentless pursuit of a competitive edge.”

And it worked wonders. While coaching at USC, his Trojans won a national championship and ran off an extraordinary 34-game winning streak, although many of those victories were later vacated due to recruiting violations. When it became clear USC was going to suffer a penalty for its violations, Carroll bolted to Seattle.

Even before he landed in the Pacific Northwest, it was generally accepted among football pundits that while his over-the-top act might work well with young, malleable college kids, it would flop among the seasoned pros in the NFL. In just a few years, he guided his team to the Super Bowl, proving his critics wrong. But Carroll was never resentful of his detractors, refusing to feed on their negative energy.

And on Sunday, back in the ecstatic dressing room, he only wanted to see that beautiful championship trophy lifted high – to show the players how proud he was of the hard journey  they had undertaken to achieve their goal.

“We all we got! We all we need!” echoed through the jubilant Seahawks dressing room three times before the players moved on to their now famous Carroll-inspired rallying cry:

With Pete Carroll leading them, the sky’s the limit. Win Forever, baby.