Does fighting have a role in hockey? 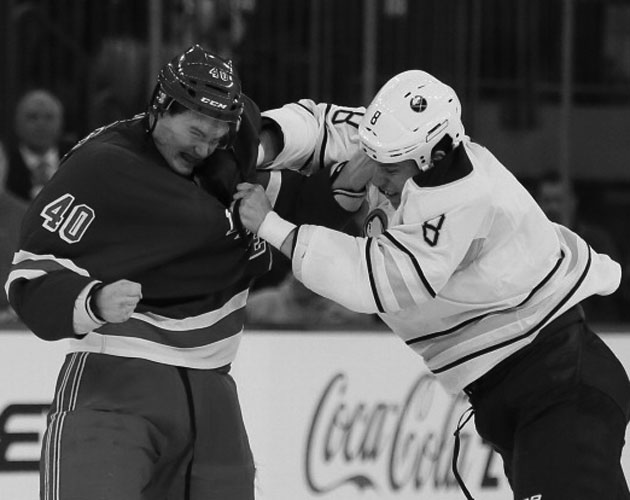 Peter Muggeridge finds a compromise to one of hockey’s greatest debates: to fight or not to fight.

Every year since I was a child, watching games between the Philadelphia Flyers and Boston Bruins devolve into prolific on-ice battles,there’s been an annual push by certain media outlets to ban fighting from hockey.

This season, it’s USA Today’s turn to take up the anti-violence cause, recently running a feature suggesting that fighting is down this season and predicting that the days of on-ice pugilism is numbered.

The paper’s case against fighting is championed by Ken Dryden, who rolled out the usual stale arguments: it’s unsafe, sets a bad role model for youngsters, diminishes the quality of the game, etc. Fighting, concludes the goaltender-turned-psychologist, “is negative role modeling for younger hockey players and directly contradicts efforts that promote safety and mutual respect.”

To it’s credit, the USA Today also ran a guest column defending fighting. Former Toronto Maple Leaf general manager Brian Burke makes an argument (which would please even Don Cherry) that fighting is necessary because it “regulates the level of violence in our game.” He feels the occasional bout acts as a safety valve, allowing two combatants to release emotions that, if bottled up, will result in other forms of violence, like dangerous stick fouls or career-threatening hits from behind or, worse of all, brutal attempts to injure by “gutless, little back-stabbing” players (Don Cherry’s words).

I have always enjoyed a good, clean fight. Hockey is a rough and combative sport and sometimes tempers boil over, resulting in a cathartic scrap. Cheap shots, showboating or targeting of star players must be addressed and, because the referees can’t call everything, there’s no other way of doing it than to drop the gloves. While it may come off as a crude sort of frontier justice, even players like Wayne Gretzky and Bobby Orr agree that it’s a necessary form of self-policing.

I’ve never witnessed a fight that didn’t immediately get the crowd’s interest or draw a huge ovation for one or both combatants. The final toll of most hockey tilts is not all that serious – a couple of bruised knuckles or a black eye. When it’s over, the boys pat each other on the back, justice is served, tempers are restored and the skill players can once again take over the game.

That said, I’m no fan of today’s super-heavyweight goons who, while barely able to skate or shoot, are well-trained in the skills of boxing or mixed martial arts. These burly behemoths pick out the opposition’s designated strongman and stage a fight that, more often than not, occurs outside the flow of the game. It’s these fights that often end in scary injury.

So here’s my proposal to appease the anti-violence lobby. Let’s try to eliminate the super-heavyweight fighters and their dangerous pre-ordained battles. However, let’s not get too bent out of shape if a middleweight fight does occur. If the lads are willing – and there’s a real reason for the skirmish – give them a five-minute major and let the game continue.

Fighting has always played an important role in hockey as long as it develops organically in the context of the match. If the powers that be try to penalize this out of existence, they’ll not only create an environment for a different kind of violence but, more importantly, sacrifice a major chunk of the fan-base, those who truly know – and love – the game.