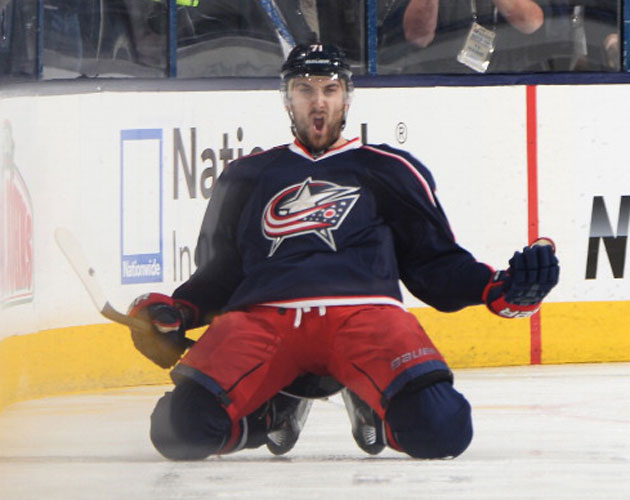 Quick, how many of you can name one player on the Columbus Blue Jackets? Anyone? Probably not, because for years this forgettable franchise has lived out an anonymous existence, languishing near the bottom of the standings and, once Rick Nash left, possessing absolutely no star power.

And until this year, the Jackets had never won a playoff game. Just another crappy U.S. expansion team destined to fail.

Maybe not – after Wednesday’s thrilling overtime win against the heavily favoured Pittsburgh Penguins, they find themselves tied in the series and holding all the momentum. Yes, hockey fans, this is how a team on a roll looks:

And they’re rapidly becoming the best story of this playoff season. After Nick (son of Mike) Foligno scored in overtime to cap a stunning comeback, word soon broke that he’d called the goal in the dressing room before OT started.

Teammate Brandon Dubinsky, who tied the game after a mad scramble with 27 seconds left, witnessed Foligno’s prophecy. Dubinsky told reporters: “Nick’s exact words were: ‘I’m going to go out and score the OT goal. I haven’t done a whole lot until now, but I’m going to find a way to score. I hope you don’t mind,’”

The local fans are grateful for this story. They’ve been screaming themselves hoarse all series and after Foligno’s goal, they almost brought down the roof of Nationwide Arena.

Yes, the Blue Jackets are living a charmed life, benefitting from shaky Penguin goaltending and a curiously ineffective Sidney Crosby. This could all change as the series heads back to Pittsburgh but it’s nice to see that this team of hark-working unknowns are finally making a name for themselves.