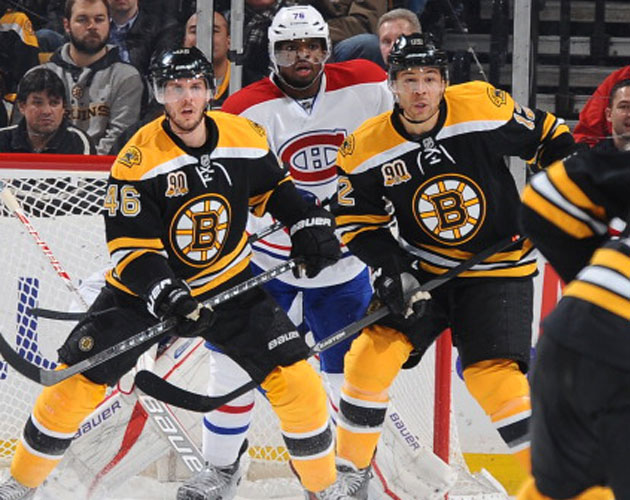 When the Montreal Canadiens and Boston Bruins strap on their skates for Round 2 of the 2014 NHL playoffs, they’ll be renewing one of the longest and fiercest rivalries in pro sports.

The two original-six antagonists have met 33 times in the post-season, with Montreal prevailing in 24. But despite the apparent domination, the clashes have been thrillingly close, providing some of the most dramatic moments and bloodiest battles in NHL playoff history

Over that span, the greatest names in hockey have faced off against each other – Maurice Richard, Jean Beliveau, Guy Lafluer, Ken Dryden, Larry Robinson and Patrick Roy tilting swords against Eddie Shore, Bobby Orr, Phil Esposito, Ray Bourque and Cam Neely in a slew of memorably intense playoff series.

And the two fanbases? Well, to say they don’t get along is an understatement. The Bruins traditional style of smashmouth hockey has a lot to do with this. Ever since the rollicking days of the Big Bad Bruins of the 1970s, Boston’s game has always been a combination of skill and physical play. In the old days, it was Terry O’Reilly, Wayne Cashman and John Wensink. Today, it’s forces of nature like Milan Lucic and Zdeno Chara who routinely lay the smackdown on P.K Subban, Max Pacioretty, David Desharnais and some of the skilled but smaller Canadiens.

And while Montreal is often unwilling or unable to beat Boston in the alley, they do own a major edge on the where it matters: Montreal fans have celebrated 24 Stanley Cups, Boston, only six.

It always adds up to a fantastic conflict that provides great excitement for fans in both cities. So, to get you prepped for the renewal of hostilities between these two bitter enemies, let’s look at some at the greatest playoff moments between the two teams to see just how the seeds of rivalry were sown.

1943: Bruins defeat Canadiens in 5 games
Theme: Enjoy the taste of this victory while it lasts

A war-time match up between the two rivals seems like an appropriate place to begin our historical look. With Flash Hollet, Dit Clapper, Buzz Boll and Busher Jackson leading the way, the Bruins prevail in a close (three games went into overtime) series. It’s Maruice Richard’s first post-season action and the young Rocket still hasn’t found his playoff legs. It also marks the last time for the next 45 years that the Bruins will defeat the Canadiens in a playoff match-up.

1952: Canadiens defeat Bruins in 7 games
Theme: “You don’t know his guy. He’d have to be dead to allow himself to be carried off.” Gordon Young, Canadiens team doctor.

Maruice Richard scores the game winner in Game 7 despite having been knocked unconscious earlier in the match. In one of the greatest sport photos of all time captures a bruised and battered Richard shakes hands with a broken-nosed, black-eyed Sugar Jim Henry.

Bobby Orr! Phil Esposito! Derek Sanderson! The Big Bad Bruins have a huge edge on paper but the proud Canadiens, led by Jean Bealiveau, Frank Mahovolich and Henri Richard, refuse to back down. In one of the greatest comebacks in playoff history, Montreal recovers from a 5-1 deficit to eventually win 7-5 and take a stranglehold on this first-round series. Watch the stunning turnaround in all its glory.

It’s another hot-and-heavy spring match-up between the two teams that typifies everything that was great about the playoffs. Montreal, with its tremendously skilled line-up (Guy Lafleur, Larry Robinson, Ken Dryden, et al) battles the ultra-physical Bruins in a memorable back-and-forth, six-game series. Talent – as it so often does – wins out and Montreal takes home the Cup, leaving Boston fans to take solace with their one moral victory.

After years of heartbreaking defeats, the Bruins, leading by a goal, are poised to finally defeat the Canadiens – in Montreal! Late in the game, the Bruins take an inexplicable too many men on the ice penalty, prompting the great Montreal play-by-play announcer Danny Gallivan to utter this prophetic line: “A terribly inopportune time for the Bruins to take a penalty of that nature and that magnitude.” Montreal fans send up a roar, perhaps rousing the ghosts of the old Monreal Forum.

Then, as time ticks down, this happens:

Followed (of course) by this:

Finally, after 45 years of failure, the Bruins slay the Canadiens and break the seemingly endless playoff hex. Steve Kasper and Cam Neely score two goals each and finally skate off victorious, leaving goalie Patrick Roy and a shocked Canadiens team in its wake.

A very close series goes down to the wire. Though Montreal is overmatched physically (what else is new) they manage to hang around, pushing the series to 7 games. After almost surrendering the game-winner, the Bruins take over play, leading to Nathan Horton’s inevitable overtime marker. The goal sends Boston fans into a frenzy, gloating over the fact they once again own  bragging rights in this enduring rivalry.