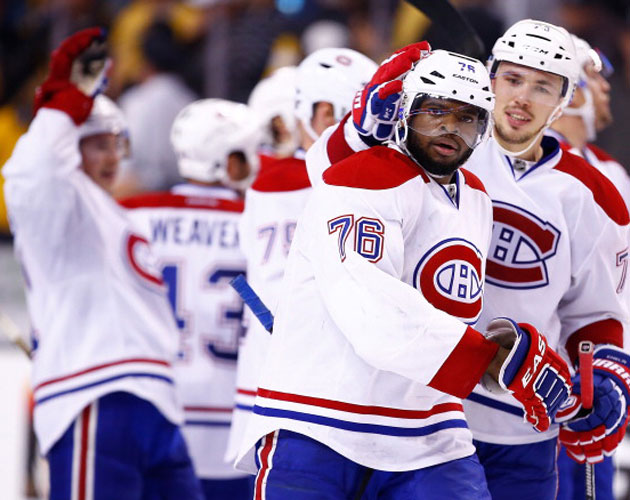 Let’s get this out of the way. I’m an unabashed P.K. Subban fan, especially after his overtime blast from the point sealed Game 1 for the Montreal Canadiens over the Boston Bruins in their second round Stanley Cup playoff series.

As Subban and his teammates celebrated at centre ice, Boston Bruins fans peppered them with plastic bottles and debris, frustrated that the Canadiens had stolen a game in which they were badly outplayed. But, thanks to P.K’s heroics, Canadiens goalie Carey Price playing his best playoff game ever and Boston forwards being struck by the deadly combination of missed opportunities and bad luck, the Habs have snatched home-ice advantage away from the Bruins.

It’s why Montreal fans have grown to love the 24-year-old defenceman from Toronto. Yes, Pernell Karl Subban possesses a rare combination of skill, creativity, emotion, enthusiasm and swagger that not only lifts his teammates but delights hometown fans, who have been desperately waiting for a player with such a high-octane game Guy Lafleur retired over two decades ago.

Because of his rambunctious nature and love of the spotlight, he’s routinely booed around the league whenever he touches the puck. In Boston, however, he’s despised, thanks to a couple of nasty hits he’s delivered over the years that have rubbed Bruins players the wrong way. In a recent Boston Herald column, Stephen Harris described him as the “despicably villainous P.K. Subban” suggesting that the defenceman’s excessive celebrations, out-of-control emotions and questionable physical play have upset Bruins players, an almost laughable assertion coming from a team that employs noted ruffians like Brad Marchand, Milan Lucic and Johnny Boychuk.

Inevitably, after P.K.’s Game 1 overtime goal, the tiresome Twitter race-baiters came out in full force, calling him every ugly name in the book. While lamentable, this has almost become a rite of spring in Boston whenever a black player scores on them. Remember the reaction to Joel Ward’s 2012 overtime goal against the Bruins?

I’m guessing that Subban will use this nastiness to fire himself up for the next game. But he’ll also have to contain his emotions – when he gets overly amped and tries to do too much, it hurts his game defensively and finds him crossing the fine line between intensity and out-of-control behaviour. Boston knows this and will try to do everything humanly possible to push him over the top, and throw him off his game for the remainder of the series.

That’s the way it works whenever Boston and Montreal battle in the playoffs.

Enjoy the series everyone.