Keeping Your Mother Out of the World Cup 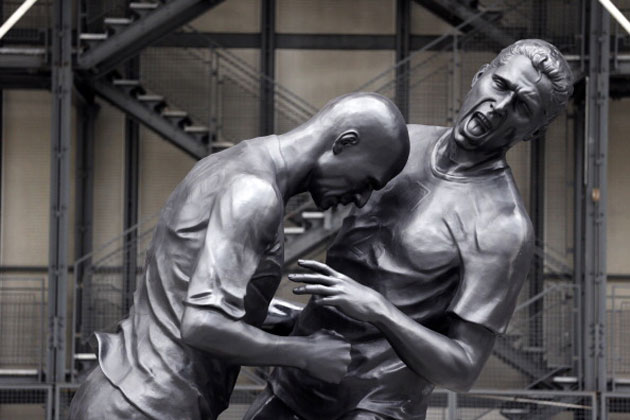 Bronze sculpture at the Centre Pompidou, Paris immortalizes the 'head butt' given by the French former football champion Zinedine Zidane to Italian player Materazzi during the World Cup final in 2006. KENZO TRIBOUILLARD/AFP/Getty Images

Nobody knows for sure what the Italian player, Materazzi, said to the French midfielder, Zidane, at the World Cup final in 2006.

But it was enough to provoke Zidane’s infamous head butt.

Depending on who you believe, the Italian’s trash talk suggested something unsavoury about the Frenchman’s mother or sister.

It had the desired effect, enraging Zidane.

He was sent off the field, never played professionally again and Italy won in a shootout.

You probably won’t see anything as explosive as that head butt at World Cup 2014.

But anger is a big part of the game, any game, and absolutely necessary, says Mitch Abrams, sports psychologist and author of “Anger Management in Sport.”

“Competition ultimately is about one person or one team dominating or bettering the other,” he says, speaking from his office in New Jersey. “If you don’t get angry playing sports, either you don’t care or you’re not paying attention.”

After all, the point of any sporting match “is an opponent trying to stop you from achieving your goal. Naturally you’re going to get angry.”

Successful athletes, says Abrams, speaking from his office in New Jersey, “are able to harness that anger.”

The emotion, on the playing field as in life, is “absolutely necessary,” he says.

“Anger is completely normal and part of being human, neither good nor bad.”

It’s a normal reaction when you feel somebody wrongs you, whether it’s a bad call by a ref or a trash talking opponent — or someone at home or at work.

“At moderate levels, anger can be useful, giving you oomph,” says Abrams. “It increases stamina, strength, cognitive processing and dulls perception of pain.

“Anger,” he says, “can help physical performance, as long as it’s not over the top.”

When that happens, losing it can mean losing the game.

It’s learning “to identify how you feel and adjusting your anger to what the task at hand requires,” he says.

Goading and taunting an opposing player until he loses it is a big win for the trash talker.

“It’s about getting them past the tipping point,” he says. “If someone knows he can get under your skin, he’s going to be merciless.”

Abrams’ advice to clients: “I tell them, ‘You want to be teflon, let it roll off you.’ If you’re ahead in the game, just look at the scoreboard and smile.”

Training, he says, should drill the mental skills as well as the physical ones.

Players are already vulnerable due to the stress of world competition and, often, exhaustion, he says.

And the trash talking won’t stop.

“If society knew what players say to each other in the locker room,” Abrams says, “they’d be shocked by the racial epithets and homophobia. And that’s among people who care about one another! It’s a very blurry line between hazing and rite of passage team building.”

Insulting a player’s manhood is the most common taunt. “But everybody knows you’re not allowed to talk about people’s mothers.

“Unfortunately, some players are so ultra competitive, so determined to win at any cost, they’ll go over the line.”