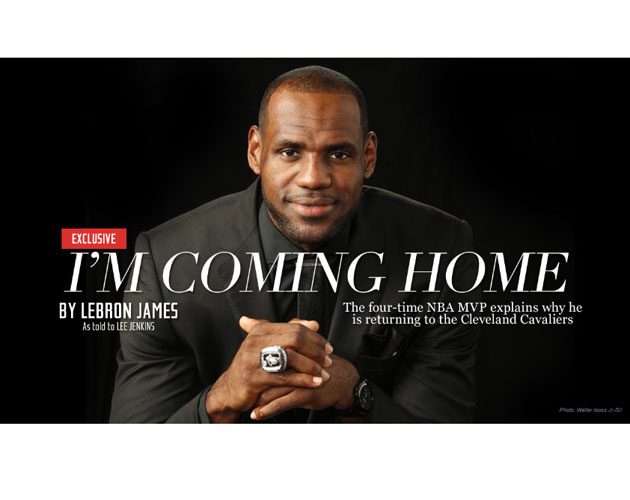 In a move that stunned basketball fans, LeBron James has announced he will be returning to his old team, the Cleveland Cavaliers.

We all remember the Ohio native abandoned Cleveland four years ago to sign with his pals in Miami, going on to win two NBA championships. He left behind him an apoplectic letter-writing owner and a city of angry, frustrated and disillusioned fans.

In order to explain the motivation behind his return, basketball’s best player dictated a curious essay that’s running on Sports Illustrated. (Great scoop, SI!) In it we hear from a chastened LeBron who, while not actually apologizing for his sudden departure four years ago, promises to make amends for what was deemed a betrayal.

Let’s take a look at the highlights of his essay.

– A strong opening. LeBron wisely appeals to fans with an emotional pitch, hoping to mend fences by alluding to the fact he’s really been one of them all along. He neglects to add: “It’s also the place I ditched as soon I possibly could to sign with Miami.”

“Remember when I was sitting up there at the Boys & Girls Club in 2010? I was thinking, This is really tough. I could feel it. I was leaving something I had spent a long time creating.”

– Here Lebron references the notorious press conference where he announced his decision to leave for Miami. But is he really being completely honest? No one (outside of Cleveland) really faulted him for leaving a third-rate city and a second-rate team for the glamour of South Beach and its championship calibre squad. Was that decision really “really tough”?

“The hardest thing to leave is what I built with those guys.”

– So, to recap, it was “really tough” to leave Cleveland the first time around. But now leaving Miami is “the hardest thing.” I’m confused.

“My goal is still to win as many titles as possible, no question. But what’s most important for me is bringing one trophy back to Northeast Ohio.”

– LeBron frequently says he’s all about winning rings. No problem there. But then why did he choose to sign with Cleveland, a club he freely admits is “not ready right now.” If his goal is indeed to win titles, he’s chosen a team that’s nowhere near ready to win titles.

“I think I can help Kyrie Irving become one of the best point guards in our league. I think I can help elevate Tristan Thompson and Dion Waiters. And I can’t wait to reunite with Anderson Varejao, one of my favorite teammates.”

A strong ending. Really, that’s all he needed to say.