Ray Rice Terminated: Hold Your Applause for the Ravens 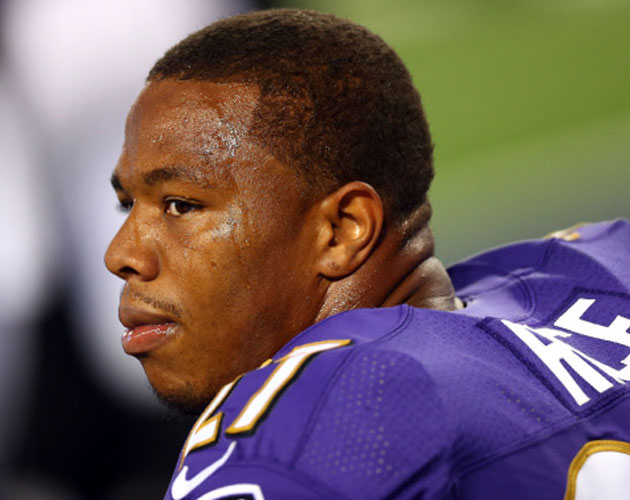 NFL player Ray Rice hit his wife almost eight months ago. This week (Sept. 8, 2014), the Baltimore Ravens – the team that initially stood by him – finally caved into public pressure and terminated his contract.

Does the timing seem funny to you? For those of you applauding the Ravens for kicking the abusive athlete to the curb, please hold your applause. This move had less to do with the Ravens’ views on domestic violence than it had with the organization’s concern for its public image.

Originally, the NFL gave Rice the ridiculously light punishment of a two-game suspension after it was reported the star running back had hit his then-fiancée Janey Palmer in an Atlantic City casino elevator. The Ravens even staged the obligatory press conference where Rice apologized for his actions and stated his intention of moving forward. At the press conference, Palmer said: “I deeply regret the role I played in the incident that night.” Umm, excuse me? All of the things that are wrong with that sentence deserve a whole other rant.

Here’s the thing: Rice is unfortunately not the first athlete to beat his wife. The list of domestic violence in almost all professional sports is long and sordid. Usually, the perpetrator is publicly scolded for his actions, apologizes for them and then it all fades from public view, the athlete returning to action as if nothing had happened.

But Rice’s case was different. It was only when footage of the actual assault was released via many media sites that people really started to care, and the Ravens decided to act.

How barbaric has our culture become that Internet users are willingly clicking on a link to watch a man abuse his wife? Apparently, we haven’t come far from the public executions of the medieval times. Now, we smugly express our moral outrage at domestic assault while anonymously indulging in violent voyeurism while watching the disgusting videos on our iPads, laptops and smartphones.

So as you all praise the Ravens for their actions today, I want you to think for a moment: what if the video had not surfaced? After all, it’s rumoured that the video was leaked to the NFL months ago, and the repercussions were slight. The story was fading until this video brought it to light.

So don’t celebrate Rice’s penalty. Next time this happens and and it’s not caught on camera, I’m guessing there will be very little consequence.

There really aren’t any winners in this situation. The only real “winners” here are the gutter-press websites – like TMZ or Deadspin – that chose to link to the video while claiming to be outraged about domestic assault. But also benefit from the incident because, hey, that video sure is generating tons of traffic.