The five big questions from this week in sports 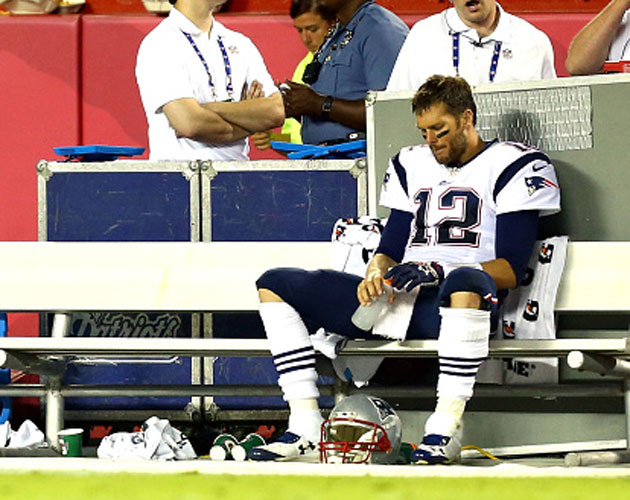 Sure looks like he is. While it would be silly to write off New England Patriots’ star quarterback after only four games, his play so far this year has been reprehensible. In Monday’s crushing defeat to Kansas City, he looked (dare we say) old and lost out there. The fact that his offensive line can’t protect him isn’t helping matters but he certainly deserved to be benched, which he was after throwing a game-icing pick six. When backup Jimmy Garoppolo was mercifully called in to relieve Brady, it marked the first time the future Hall-of-Famer has been pulled from a game for what must be the first time since…ever? The Patriots may surprise everyone and rebound (they’ve done it before) but even with the brave front Brady put on after the loss, he’s got to be hearing those nagging voices telling him the end of the road is fast approaching.

2) Should a football player be penalized for praying after a touchdown?

In the NFL’s ongoing effort to crack down on “excessive” touchdown celebrations, referees flagged Kansas City Chiefs’ safety Husain Abdullah for his endzone “prayer” on Monday night, deeming it to be unsportsmanlike conduct. The NFL penalty-fest is slowly but surely sucking the life out of the sport. Is it asking too much to watch a game without a constant flow of yellow flags or replay reviews? Referees have gone mad with power and they’re smothering the spontaneity right out of the game.

3) Has everyone forgotten about the baseball playoffs?

It would seem so. Coverage of the NFL is so ubiquitous right now that baseball has been relegated to a second-tier sport, followed mainly by the local fans of teams currently in the playoffs. That’s a shame, because October baseball produces compelling theatre, and is a welcome retreat from the constant noise and zaniness of the NFL. For those who haven’t followed the sport, WSJ provides this handy cheat sheet, helping you make informed decisions on the teams you should like and, perhaps more importantly, those you should hate.

4) Why is Rogers cutting back on Hockey Night in Canada’s kick-ass musical montages?

No clue. I love them. My kids love them. I’ve never met anyone who doesn’t get a chill watching them. Seems like a dumb move to me. Seriously, is there anything better way to get pumped up for a game?

5) What in the world is going on in the CFL standings?

Take a gander at the CFL’s East Division: The Hamilton Tiger-Cats are in first place with a record of 5-8. If they carry on this losing pace, they’re virtually guaranteed a home playoff game simply because they reside in such a horrid division. Over in the West, the Winnipeg Blue Bombers are languishing in LAST PLACE, despite having a better record than the Cats! For years, the West has been the stronger division – but this year the imbalance is laughably ridiculous.