5 BIG QUESTIONS FROM THIS WEEK IN SPORTS 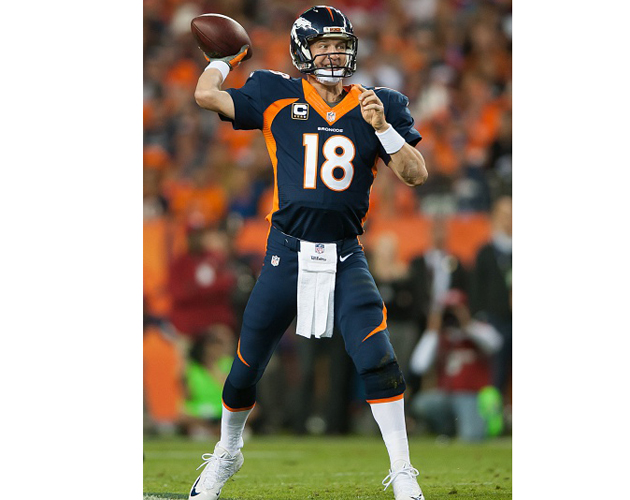 Peyton Manning will be #GOAT, another wowzer from PK Subban, and why stealing underwear can be a great career move: here are this week’s Five Big Questions that will keep you up-to-date with the world of sports.

Is Peyton Manning the best quarterback to ever play in the NFL?

In the Sunday night game against the San Francisco 49ers, Manning threw his 509th touchdown pass, breaking the NFL record previously held by football legend Brett Favre. Obviously, throwing TD passes isn’t the only measure of greatness but there’s little argument from those who have watched him over the years that, by any statistical measure, he’s the best regular season quarterback ever. His playoff resume, (11-12 all-time record, 1-2 in Super Bowls, 37 TDs vs 24 INTs) however, has left many questioning why his numbers seem ordinary in the playoffs. His one Super Bowl victory came against a sub-par Chicago Bears team. He really, really needs to run the table this year to ensure he’s not remembered as a post-season bust. I’m guessing he’ll lead Denver to glory this year and the GOAT accolades will come pouring down.

2. Who is the most exciting player in the NHL?

It’s hard argue against PK Subban after he scored this beauty in the Montreal Canadiens 3-2 win over the Colorado Avalanche on Saturday. Three words: “Et le but!”

3. Will the Kansas City Royals sweep the San Francisco Giants to win the World Series?

You never like to bet against a team riding the wave of such an historic post-season roll. However, in the World Series, the Royals will be matched against a team very similar to themselves in the San Francisco Giants. Neither team has a signature star but they’ve both managed to win handily all post-season through a remarkable combination of great bullpen work and ridiculously good fortune. So which team’s luck will run out first? Look for the Giants will win in six, with Madison Bumgarner and Buster Posey leading the way.

4. Did Dallas Cowboys running back Joseph Randle put his career in jeopardy after being arrested for shoplifiting underwear?

Far from it. In fact, the rookie Cowboy player has been rewarded for his poor judgement, landing an endorsement deal with MeUndies, a company that claims to make the “world’s most comfortable underwear.” According to ESPN.com, Joseph will help pitch MeUndie’s product and will help donate underwear to children in need. In return, the fledgling company will help defray the cost of Joseph’s fine and provide him with a lifetime supply of gitch. Only in America.

5. What is wrong with the Edmonton Oilers?

The team with so much talent begins another season with a thud – winless in five games. Oilers radio analyst Bob Stauffer nails his assessment of the team woes in just 131 characters:

Lots of reasons for an 0-4-1 start for the #Oilers. 0 combined goals for Eberle. Perron, RNH, Pouliot and Draisaitl is one of them