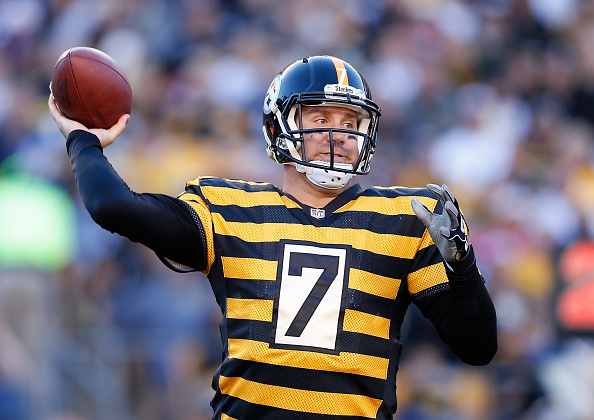 Big Ben bamboozles the Colts, Madison’s the man, HNIC struggles out of the gate and why we’re following British hockey: here are this week’s Five Big Questions that will keep you up-to-date with the world of sports.

1) Did the Pittsburgh Steelers break out those bizarre throwback uniforms to confuse the opposition?

If so, it certainly worked. The jailbird/bumblebee-themed Steelers absolutely trounced the thoroughly befuddled Indianapolis Colts on Sunday, cruising to a 51-34 win. In the process, Steeler quarterback Ben Roethlisberger threw for 522 yards and SIX touchdowns against the dazed-and-confused Colts secondary, becoming the first NFLer to throw for 500-plus yards twice in his career. No doubt Big Ben will lobby team officials to wear the 1934 throwback jerseys more than once a year.

2) Who the heck is Madison Bumgarner?

Simply one of the best World Series pitchers ever. In his dominating 5-0 shutout of the Kansas City Royals on Sunday, the San Francisco Giants’ “Big Country” Bumgarner now has the lowest ERA of any pitcher ever to throw 30 World Series innings. If the Giants can beat K.C. on Tuesday, Bumgarner will capture his third World Series ring, all by the age of 25. Should the Giants lose Game 6, there’s talk they’ll bring back their stud to start Game 7. History does not favour World Series starters who pitch on three days rest, but this is Madison Bumgarner we’re talking about.

3) Are we enjoying the revamped Hockey Night in Canada broadcast yet?

It’s a bit of a mess, if you ask me. Despite an excellent “trial run,” new host George Stroumboulopoulos hasn’t really settled in comfortably yet. (Is it too late to get Ron back from Hometown Hokey …errr, Hockey?) The spiffy new HNIC set has so much going on at any given time, it’s all a bit bewildering for us greying fans. And the cast of a-thousand-and-one commentators means there are roughly 997 people too many on the set at any given time. Yes, it’s only been three weeks, so I’m going to give it time. But I already find myself longing for the old-school minimalist approach that served HNIC so well over the years. Thank goodness we still have this.

What, throw out a ceremonial first pitch before Game 4 of Saturday night’s World Series game? And nail the strike zone from a major-league mound? No problem for 13-year-old Little League sensation Mo’ne Davis. Talk about cool under pressure.

5) Why are the Nottingham Panthers our new favourite hockey team?

Because it’s where Nathan Robinson – brother of everythingzoomer.com’s fabulous web coordinator Tianna Robinson  – currently plays. “Robbo” (as he’s known to English fans) is tearing it up for the Panthers (check out this beauty at the 5-minute mark), one of the storied franchises in the Britain’s Elite Ice Hockey League. Panther’s head coach Corey Neilson was elated when Robinson signed on with the team: “I think we’ve captured a gem in Robbo, a difference maker, and both he and the club are excited for him to put a Panther jersey on.” Go Panthers!