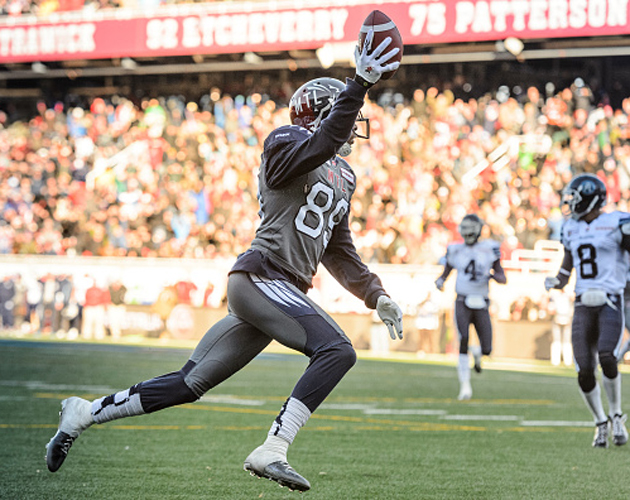 The Als are hot, Leaf fans dream, Manning stinks up the joint, and an athlete inspires: here are this week’s 5 Big Questions that will keep you up-to-date with the world of sports

1) Which team is the hottest in sports?

The Montreal Alouettes, sans doute. After their 17-14 win over the Toronto Argonauts, The Als now sit alone in first place of the CFL’s East Division. While their 9-8 record may seem pedestrian right now, it was almost unthinkable after they struggled out of the gate, beginning the season at 1-7. The team’s incredible hot streak has erased memories of their woeful start and has everyone thinking Grey Cup.  “We’re just winners now … I feel undefeated.” says receiver Duron Carter. Offensive tackle Josh Bourke is feeling equally bullish on the team’s potential: “We have a chance to win the Grey Cup. Why can’t we do it? We’re playing as good as any team in this league.”

Absolutely. Expectations are justifiably high in Toronto as the red-hot Maple Leafs rolled off off three consecutive wins, defeating the Buffalo Sabres (worst team in the league), Columbus Blue Jackets (missing half their roster to injury) and the Chicago Blackhawks (despite giving up 47 shots). This team appears unstoppable. Shhhh … don’t wake the Leaf fans up.

He thinks he does. Read what the star quarterback said after his Denver Broncos were pasted by the New England Patriots 43-21. “I don’t usually stink. But I stunk today. That’s pretty plain and simple. When the quarterback stinks, [you’re] usually not going to win many games.” Manning, it must be noted, didn’t stink in this game. He was 34-of-57 passing for 438 yards and two touchdowns. Yes he had two interceptions, but the fault lay with the Bronco’s defence, not Manning. A lot of NFL quarterbacks would love to stink as bad as this.

4) Why is Ben Roethlisberger imitating Popeye on the sidelines?

Cut the man some slack – the Steelers quarterback just threw six touchdown passes for his second consecutive game. However, these magnificent grimaces were the result of a late hit delivered by by Bluto, otherwise known as Baltimore Ravens’ defender Courtney Upshaw. The ultra-tough Roethlisberger was just testing to make sure that all the pieces were still there, in working order.

5) Who is Lauren Hill and why is her 47 seconds of playing time being called the feel-good sports story of the year?

Struggling from a rare form of brain cancer, Hill fulfilled her dreams by scoring points in a college basketball game. It was only going to be a small event to honour Hill’s love of basketball, but it grew and grew into this.