The 5 big questions from this week in sports 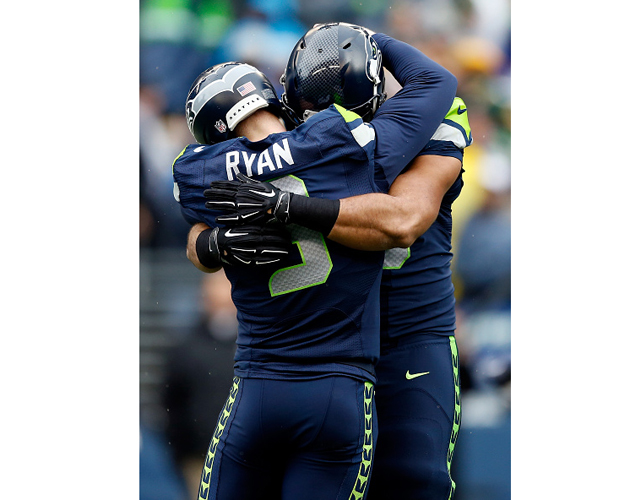 Canadians lead way to the Super Bowl, why Bostick shouldn’t be blamed and the Leafs can’t score: here are the 5 big questions from this week in Sports.

Despite the fact that the NFL has very few Canadian players, two of them played a huge role in saving the Seahawks season, which was on the verge of collapsing in their title game against the Green Bay Packers. With time ticking down and the ‘Hawks offense completely ineffective, punter Jon Ryan (from Regina) stunned the Packers by throwing this touchdown on a fake field goal attempt, giving his team one last chance.

Then, after an ensuing touchdown, Luke Wilson (from La Salle, Ont.) managed to get open and score on this unlikely 2-point conversion, all but ensuring the game would go into overtime.

2) Jon Ryan’s touchdown pass on Sunday was the first thrown by a Canadian-born player since …?

Mark Rypien in 1993, of course. A former Washington Redskin Super Bowl MPV, Rypien was born in Calgary but lived there for only a few years before moving to the U.S. So he doesn’t really count as a Canadian. But we certainly claimed him at the time.

3) Should everyone in Green Bay really be blaming Brandon Bostick for flubbing the game?

The Packers seemingly had the game wrapped up. Until this unthinkable play happened:

All the Packers needed here was for the ball to fall into the sure hands of Jordy Nelson, and the game would have been over. Instead, Bostick tried to make the play himself and bobbled the ball, allowing the Seahawks to recover and save the game. Though Bostick’s play has become the focal point of Green Bay fans’ ire, the loss shouldn’t rest on his shoulders. The Packers had multiple chances early in the game to score touchdowns, but only came away with field goals. And, late in the game, their defence completely unfolded, allowing Seattle to take over the game. So yes, Bostick’s screw-up didn’t help, but the Packers loss was truly a result of offensive and defensive breakdowns. As you can see in his tearful post-game press conference, Bostick certainly took full responsibility, which speaks volumes about the kind of man he is.

4) Which team is favoured in the Super Bowl?

It’s been over a decade since the New England Patriots won their first Super Bowl, yet it seems neither coach Bill Belichik or quarterback Brady have aged one day since. More importantly, it looks like they’re pumped for what could be their last opportunity to win a ring. Normally, I’d say the Seattle defence would shut down the Patriots but with major injuries to its secondary (Richard Sherman and Earl Thomas), New England may well be the favourite. And by favourite, I mean very slight favourite — most betting sites have the odds listed as pick-em.

Sure looks like it, after yet another depressing shutout loss to the St. Louis Blues on Saturday night. A month ago, the Leafs were tearing up the league, winning 10 of 12. But in the past dozen games they’ve crashed back to earth, winning only three and falling seven points out of the final wild card in the East. In the process, they’ve fired head coach Randy Carlyle and are sputtering along under interim Peter Horachek. Talk has now changed from playoffs to how they’re going to get rid of burdensome contracts Phil Kessel and Dion Phaneuf. Kessel, who’s become an object of scorn among Leaf fans for his disinterested play, seems puzzled about these collapses, which he’s experienced far too often during his stay in Toronto:

“We’re always right there every year and then all of a sudden we just hit these rough patches…You know you’re going to lose a couple games here and there, but you can’t go on long losing streaks like we’ve had in the past. I think that happens every year with us and we’ve just got to somehow kick that.”

It may be too late to kick the habit this year.