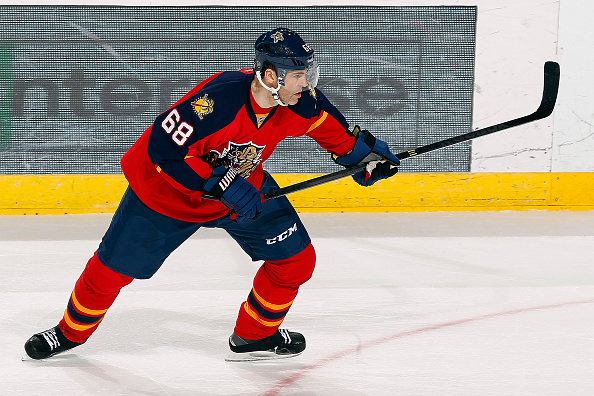 At 43, hockey star Jaromir Jagr has spent much of the season telling anyone who would listen that he still has a lot of good hockey left in him. And on Sunday night, he backed up this claim on the ice, scoring an important goal to help his new team in their playoff push.

Acquired last week from the New Jersey Devils to provide leadership and perhaps some firepower for the young Florida Panthers, the ageless Jagr has paid immediate dividends, scoring the first goal of what turned out to be an important 4-3 win Sunday over the Tampa Bay Lightning.

Besides the goal, which tied him for fifth place on the NHL’s all-time goals list with Phil Esposito, Jagr also assisted on Alexsander Barkov’s goal.

A while back, in an attempt to explain to a reporter how his game has changed as he’s advanced in years, the Czech-born star gave this enigmatic response:

“At my age, I feel like I know a lot of things what to do, but I just cannot do it anymore. It’s a lot easier to tell [younger players] what to do because they’ve still got the legs and hands to do it. I just know things, but I cannot do them anymore.”

But watch the video below – you’ll see Jagr “coming in slow and low” to score. Granted, the legs might no be there any longer. But the hands? They still seem just fine.