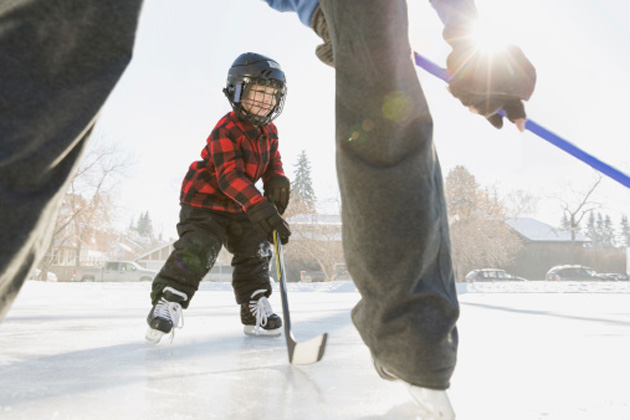 The other day after my son’s peewee hockey game, I found myself musing on the passage of time.

This ragged team that I help coach (I tie skates and lug water bottles) was down 2-0 with less than two minutes to play. Enough time to rally but, as the late, great hockey broadcaster Danny Gallivan used to remind us near the end of the third period of every game, time was definitely becoming a factor.

Alas, there was to be no miracle comeback that day. We lost again, our 10th in a row, a minor hockey version of the Toronto Maple Leafs. In the dressing room after the game, the kids quickly shrugged off the defeat, sipping their post-game juice boxes and cheerfully discussing video games, their favourite NHL players and whatever else occupies third place in an 11-year-old boy’s mind.

The dads, on the other hand, were a downcast lot. Gathered solemnly in the hallway, we parsed every element of the game, blaming poor luck, missed opportunities, bad officiating and questionable coaching (surely not!).

But why, I later wondered, were we old guys so dispirited? It’s not like that game meant anything in the larger picture. None of our offspring will ever go on to play high-level hockey. It was just a fun Saturday game, a chance to get some exercise during winter months. The kids grasped this – why couldn’t we?

None of us dared admit the truth: these games aren’t really about the kids. Another season was drawing to an end, and we parents were keenly feeling the passage of time. The young ones don’t care – they have an infinite number of Saturdays ahead to play endless hockey games. For us, not so much.

Perhaps you’re rolling your eyes at this pathetic group of 40- and 50-something dads trying to relive their hockey dreams through the next generation. Marketers call this the “late youth” segment, a demographic of 40- to 50-year-old men who never outgrow their love of sports, which might explain why professional sports TV ratings reach their apex among this age group.

Call it late youth or the Peter Pan syndrome: it’s all motivated by nostalgia. Watching our children play conjures up memories of our own youth, those breezy days when we could all skate like Guy Lafleur or make acrobatic saves like Mike Palmateer.

Like many small-town Canadians, my youth was imbued with hockey, watching the Saturday night games on our old black-and-white TV and playing with brothers and friends on the road, pond or local arena. As adults, every trip to the rink transports us back in time. The familiar funk of an old arena, the worn-out wooden stands, the eccentric characters, the watered-down hot chocolate, hyper kids throwing tape at each other – it’s as if nothing has changed.

While this scenario may lack the pastoral quality of Field of Dreams, W.P. Kinsella’s classic ode to America and baseball (grown men get misty-eyed watching Ray and his dad play one last game of catch on that mystical diamond), the emotional links to the past are just as real.

But in baseball, there is no clock, and the foul lines stretch to eternity. Hockey is confined by Plexiglass, wooden boards and a game clock that ticks ruthlessly down to zero. And time is running out on me. Every game my son plays brings him one step closer to that inevitable day when he loses interest, leaving his father alone to his quaint memories.

What will we do without those frigid early mornings, the clattering of sticks and pucks and the hypnotic trance one falls into while watching the Zamboni make its slow turns?

I’m not sure I want to think about it yet. My son, he’s still young and there are a few more seasons left in which he can forge new memories and I can relive old ones. There are more skates to be tied, goals to be scored and championships to be won. I’m not yet ready to let that go.

Yet in the back of my mind, I know the clock is ticking: it’s late in the third period, and time is definitely becoming a factor.

Peter Muggeridge is a senior editor at Zoomer magazine who blogs on sports at everythingzoomer.com.