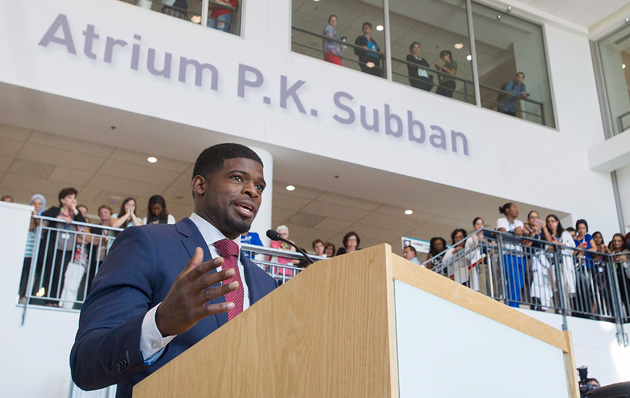 PK Subban’s $10 million dollar donation to Montreal’s Children’s Hospital Foundation is being called the largest ever philanthropic commitment by a Canadian sports figure.

Subban, the Montreal Canadiens star defenceman, is already well known in Canada and beloved in Montreal for his booming shot, spectacular skills and larger-than-life personality. Now he’s trying to make sure his star shines just as brightly off the ice, the major motivation behind his historic donation.

“I have made a promise to these kids,” said the 26-year-old at the press conference. “You’ll be seeing a lot more of me. Everybody needs the help, right? That’s all I’m trying to do – help as much as I can.”

The young defenceman is very aware of his star status and immense wealth and the accompanying responsibility that comes with wearing the Canadiens’ jersey, especially in a hockey-mad community like Montreal. “I am proud to follow in the footsteps of my idol, Jean Beliveau, by giving back to the community through my involvement and my support,” he said. “Mrs. Beliveau, I hope to make your husband proud.”

“PK has two goals every day; to be a better hockey player and to be a better person,” said Subban’s father Karl, onhand with the rest of his family for the occasion.

There was an immediate outpouring of gratitude for Subban’s charitable action, so much that the Montreal Children’s Hospital was trending worldwide.

#PKSubban is my new favourite hockey player! Giving back to those who need it most is #1 in my books. More need to follow this lead!

We may not like him on the ice, but his commitment to giving to those in need is inspirational #pksubban https://t.co/vivPjSuP6R — Wally (@Wally97) September 16, 2015

No matter what team you root for, THIS IS A WIN FOR ALL! Give it up for PK!!! #PKSubban PK Subban Canadiens de… http://t.co/QtOwRn9NlA — The Zambonis (@TheZambonis) September 16, 2015