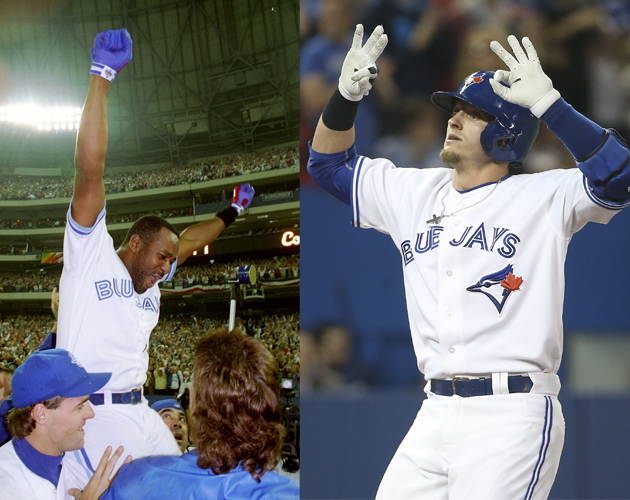 Thanks to their scintillating season, it’s only natural for older fans to make comparisons with the famed 1993 squad that captured the World Series on Joe Carter’s walk-off home run – and ask: how does this year’s team match up against the champs from ’93?

Obviously, to accurately answer that question, we’ll have to wait and see what unfolds in the postseason. Until then, let’s compare the two teams on a position-by-position basis, a fun but highly flawed and completely unscientific formula that’s guaranteed to drive the stat-heads crazy.

1993: Cito Gaston
2015: John Gibbons
Head-to-head: Despite the fact both hail from San Antonio, TX, these two skippers could not be more unalike. Cito was a quiet man whose old-school management style perfectly suited a team stocked with veteran all-stars. Gibbons, on the other hand, is a talkative and cheerful chap, who gets along with young players and makes more in-game moves than Gaston.
Edge: Gaston takes this one. He guided the Jays to two World Series – Gibbons had never managed a .500 team until this year.

1993: Pat Borders
2015: Russell Martin
Head-to-head: The Canadian-born Martin is a superb defensive catcher who can hit for power and ably handles a pitching staff. Despite his surprise showing in the 1992 World Series – when he captured the MVP – Borders was no more than a journeyman catcher.
Edge: Martin without an argument.

1993: Jon Olerud
2015: Justin Smoak
Head-to-head: Olerud was a perennial league leader in batting average, had a good eye, was a good fielder and could turn on the power when needed. Smoak is a slick-fielding journeyman who had a decent season at the plate with the Jays.
Edge: Olerud takes this one easily.

1993: Roberto Alomar
2015: Ryan Goins
Head-to-head: Alomar was a fantastic post-season player who was an above average hitter, fielded his position like no other, could steal a base and always seemed to come through in the clutch. Goins is a slick fielder who is getting better at the plate.
Edge: Alomar, a Hall-of-Famer, wins this by a mile

1993: Ed Sprague
2015: Josh Donaldson
Head-to-head: Donaldson is coming off a career season that will likely see him crowned AL MVP. He hits for average and power, fields his position well and was an important clubhouse leader. Sprague, meanwhile, was a decent player who had a mostly forgettable tenure with the team.
Edge: Donaldson wins this by a landslide.

1993: Tony Fernandez
2015: Troy Tulowitzki
Head-to-head: Fernandez was a sight to behold on the field and could hit for average, if not power. Tulowitzki matches Fernandez on defence, hits for more power and has the better eye.
Edge: I loved Tony but must grudgingly award this to Tulo.

1993: Rickey Henderson
2015: Ben Revere
Head-to-head: Generally considered to be the best leadoff hitter in baseball history, Henderson could hit, get on base, steal bases and hit for power. While not a homerun hitter, Revere has shown this season he’s no slouch at the plate or on the basepaths.
Edge: Henderson, another Hall-of-Famer, wins this one in a walk.

1993: Devon White
2015: Kevin Pillar
Head-to-head: White was one of the best defensive centre-fielders of his era and could hit for power and steal a base. Pillar, while an excellent defender, is still struggling to find his stroke at the plate.
Edge: Devo, with better range and more power, takes it.

1993: Joe Carter
2015: Jose Bautista
Head-to-head: Carter hit for power and was an RBI machine. Bautista hits more homers, drives in as many runs, takes more walks, is a better fielder with a much better arm.
Edge: While it’s hard not to choose the biggest hero in Blue Jays’ history, Joey Bats is the better player.

1993: Paul Molitor
2015: Edwin Encarnacion
Head-to-head: Encarnacion, who had a banner year, is basically a power hitter who drives in runs. Molitor didn’t hit as many home runs but he did everything else much better than Edwin.
Edge: Molitor, the third member of the ’93 squad in the Hall of Fame, gets the nomination.

1993: Juan Guzman, Pat Hentgen, Todd Stottlemyre, Dave Stewart, Jack Morris
2015: David Price, Marcus Stroman, R.A. Dickey, Marco Estrada, Mark Buehrle
Head-to-head: This one’s tough. While the 1993 staff had Morris and Stewart – grizzled post-season stars – 2015’s team has David Price, a true ace that they might be able to ride through the playoffs, similar to how the San Francisco Giants won last year by relying heavily on their ace, Madison Bumgarner.
Edge: If Price can continue to pitch as he did in the regular season, we’ll give it to the 2015 staff.

1993: Duane Ward
2015: Roberto Ossuna
Head-to-head: Ossuna had a breakout rookie season as the Jays’ closer. He is, however, only 20 years old and might wilt in the playoff spotlight. Ward, on the other hand, was basically unhittable in his two trips to the World Series.
Edge: Ward, until proven otherwise.

So which squad was better?

It’s almost too close to call. While the 2015 squad boasts more offensive firepower, the 1993 squad was stacked with historically good batters and pitchers who were experienced enough to do what it took to win. So we’ll give the slight edge to the old guys. But if this year’s team goes on to capture the World Series? We’ll have to call it a tie.