Panic in Puckland: All Canadian Teams Eliminated From Playoffs 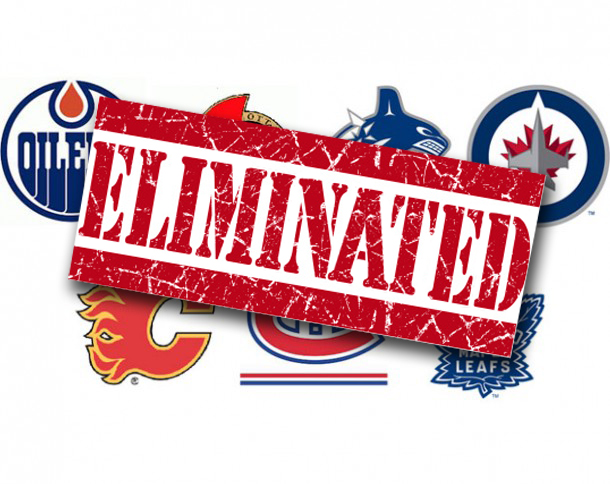 Canadian hockey fans will have a lot of time on their hands this spring as every single one of this country’s seven hockey franchises have now been eliminated from the 2016 Stanley Cup Playoffs.

While everyone who even casually follows the sport suspected the Toronto Maple Leafs and Edmonton Oilers would miss the post-season, pundits felt that Vancouver Canucks, Calgary Flames, Winnipeg Jets, Ottawa Senators all had decent shot. The Montreal Canadiens were seen as a legitimate contender.

Somewhere along the way, things went horribly wrong, leaving fans with the unenticing prospect of watching teams in hockey hotbeds like Florida, Nashville, Dallas, Anaheim, San Jose and Brooklyn vie for the Cup.

Vancouver Canucks: The Sedin twins have obviously reached an age where they can no longer overcome the team’s shortcomings (defence, goaltending, scoring) all by themselves.

Calgary Flames: Coach Bob Hartley’s system of blocking shots and rugged play demands a lot of players. After a year or so, players tend to revolt. Add to this the bad goaltending and it’s easy to see why this team won’t be playing in the post-season.

Winnipeg Jets: For a team that’s average in just about every area, it must rely on good luck to qualify for the playoffs. Unfortunately, the Jets were very unlucky this year.

Montreal Canadiens: The Habs started out of the gate 9-0, a team that had visions of winning a Stanley Cup. In November, superstar goalie Carey Price got hurt, exposing the team’s many flaws. And when it became clear that Price would not be returning until next season, the team basically quit on coach Michel Therrien.