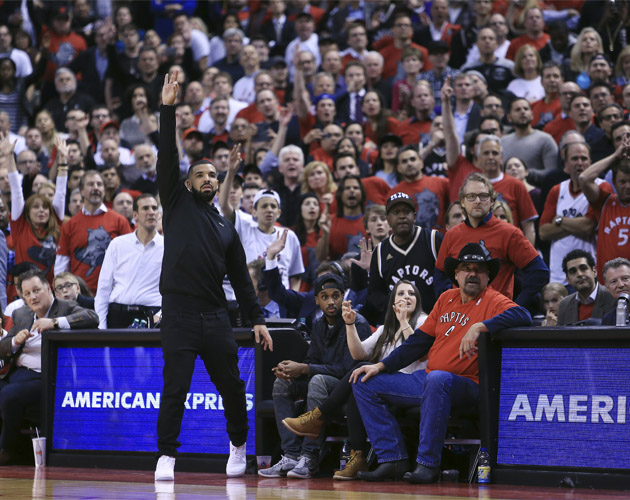 Can the Toronto Raptors' No. 1 fan Drake win over hockey fans to basketball?

As the Toronto Raptors get set to tip off their first game in the second round of the NBA playoffs against the Miami Heat, can they successfully convert a nation of hockey junkies into basketball fans?

Early indications are not promising. At a time when interest in basketball should be peaking, television ratings are down and tickets are fairly easy to come by, two indicators that #WeTheNorth (as the Raptors refer to us) haven’t exactly caught basketball fever.

Even with Kyle Lowry and DeMar DeRozan – two exciting and likeable all-stars – the Raptors still can’t score big with fans. Need proof? Check out last week’s television ratings where the crucial Raptors against the Indianapolis Pacers game drew less than one-third of the viewers who watched the New York Islanders against the Florida Panthers hockey game.

So even with the dearth of Canadian teams in the NHL playoffs, why aren’t the Raptors winning over lifelong puckheads? Here are 10 reasons why hockey fans just won’t watch basketball:

1) The Reward: The Stanley Cup or the Larry O’Brien Trophy: which would you rather win?
2) Sacrificing it all: Playoff hockey action gets intensely physical. Players block shots, play through pain and endure incredible abuse to do anything it takes to win a game. Basketball has its own brand of intensity, but hockey’s will take your breath away.
3) Sudden Death: There’s nothing in sports as exhilarating (unless you’re on the losing side) as an overtime goal in the NHL playoffs. Basketball overtimes lack the all-or-nothing drama (remember this epic 4-period OT?) that hockey offers.
4) Crying Foul: There are just too many ticky-tack or non-existent fouls called in a basketball game. It slows play, creates aggravation among players and fans and far too often gives referees the unseemly power to decide the outcome of the game.
5) Sit Down and Shut Up: Basketball coaches love to hog camera time. They prowl the sidelines screaming at players and refs acting like they have a major role in the proceedings. (See next item)
6) Oh Good, Another Timeout: Just when you think a basketball game is getting exciting, when teams start running the floor, trading baskets and scrambling for possession, the coach steps in and calls a timeout. Action stops abruptly, the players meander over to the bench, endless commercials ensue and the game never really regains its frenetic pace.
7) The Hype Machine: The NBA really needs to tone down its in-game presentation. Every game is presented as an epic tilt, every basket draws screaming praise from the PA announcer. And do we really need music during the game?
8) Whiners: While NHL players complain to the refs, they don’t go in for the same over-the top histrionics as their NBA counterparts.
9) Everybody, Look at Me! There’s too much fist pumping, chest-thumping, pointing to the sky in the NBA. It gets tiresome.
10) Don Cherry: At 82, he’s still the most entertaining sports personality.