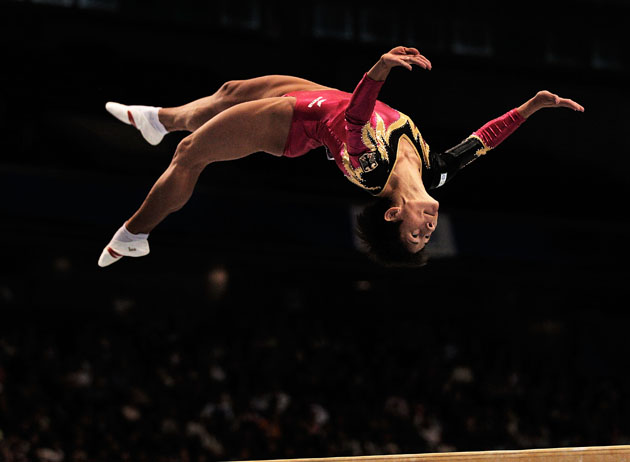 Returning for her record-setting seventh Olympic Games, 41-year-old Oksana Chusovitina of Uzbekistan has become a breakout star in Rio.

For Oksana Chusovitina, age is just a number.

“I really love the sport,” she recently told reporters through a translator. “I love to give pleasure to the public. I love to come out and perform for the public and for the fans.”

The 41-year-old gymnast is competing in her seventh—yes, her seventh—Olympics and she’s the oldest woman to ever do so.

Chusovitina is going for gold in the vault category—her specialty—and all the twists and flips required to bring home the medal don’t seem to faze her one bit.

In a sport where 25-year-olds are often considered “over the hill,”—to put her longevity into some context, 22-year-old Aly Raisman has been nicknamed “Grandma” by her American teammates—Chusovitina has more than grabbed the attention of the entire world.

Even Nadia Comaneci, the legendary Romanian gymnast who won three gold medals at the 1976 Games in Montreal at the age of 14—recently spoke out about Chusovitina: “How can someone her age dare to do that to their body?” she joked. (Comaneci retired at 19.)

Back in 1992, she competed in Barcelona, Spain, for her first-ever Olympic Games. She took home the gold for the all-around team category in gymnastics. Chusovitina went on to represent Uzbekistan at the Olympics in 1996, 2000 and 2004.

Raised in Koln, Germany, the 41-year-old is back to compete for gold as part of Uzbekistan’s team after representing Germany (where she moved in 2006 for her son’s leukemia treatment) at the 2008 Olympics in Beijing (where she earned a silver for vault) and 2012 in London.

The fact that she’s still competing in 2016 is an impressive feat: one that would be considered a remarkable achievement in any sport, but is even more astonishing considering the physical hardships athletes undergo in gymnastics (Chusovitina has torn her Achilles, her biceps and her cruciate ligament in the past.)

But despite the fact that she’s competing against some women who are younger than her 17-year-old son, Alisher, Chusovitia seems unfazed by the competition and her unlikely rise in Rio.

Chusovitina moved ahead in the qualification round for the women’s vault this past Saturday, securing her spot with a score of 14.999 while competing against 16 other women—most of whom are less than half her age.

Oksana Chusovitina will compete in the vault finals on Sunday, August 14.