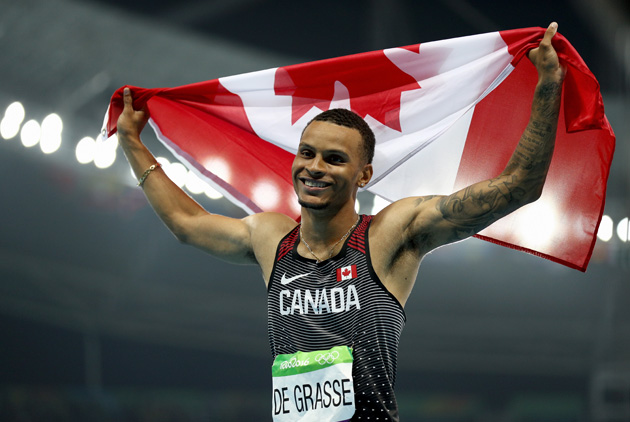 Last night, as the country celebrated Andre De Grasse’s stunning bronze medal in the 100m sprint at the Rio Olympics, former Canadian gold medal sprinter Donovan Bailey signified he’s ready to pass the torch on to the next generation.

The 21-year-old, Toronto-born De Grasse posted a personal best of 9.91 in the prestigious event. Although it wasn’t enough to catch Jamaican running legend Usain Bolt, who easily won his third consecutive Olympic 100m gold, or veteran American Justin Gatlin, who hung on to win silver, De Grasse showed the world he’ll be a force for some time to come in the sprinting world.

“I’m feeling pretty good right now, I can’t complain,” said De Grasse after the race, perhaps humbled by the moment. “To be able to race against Usain and Gatlin, being a part of the same race as them and being a part of history today in Rio, it was a great feeling for me and I just have so much to learn from that.”

Donovan Bailey, the beloved Canadian sprinter who won the country’s only 100m gold in Atlanta in 1996, delighted the nation as CBC cameras caught him jumping and cheering on De Grasse during the race. “I’m shaking,” Bailey said on the set after the race. “This is great for track and field in Canada.”

During the victory lap, De Grasse and Bolt exchanged hugs as the greatest sprinter the world has ever known gave kudos to the Canadian upstart. “He’s going to be good. He runs just like me—he’s really slow at the blocks but when he gets going, he gets going, so I think he can improve his start much better than me because he’s shorter,” said Bolt. He was even overheard telling reporters and viewers around the world to “watch him! Watch him!”, referring to the young Canadian.

De Grasse’s ascent to the top of the sprinting world comes with a Hollywood-like back story. He started racing in Grade 11, when a friend convinced him to try out. Wearing a pair of baseball shorts and borrowed spikes, the youngster lined up for a standing start, unfamiliar with starting blocks. His posted time of 11 seconds astounded everyone, including Canadian running coach Tony Sharpe who was on hand for the event.

And it seems De Grasse hasn’t stopped amazing us. So is he looking forward to Olympic gold in the next Olympics? Not so fast, says De Grasse. He’s still got the 200m and 4 x 100m relay races to run before the Summer Games come to a close.