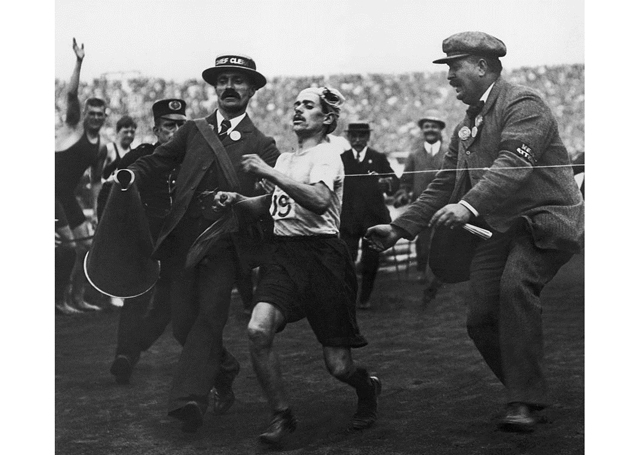 Italy's Dorando Pietri winning the marathon at the London Olympics in 1908. He was eventually disqualified for receiving help from the judges.

In 1894 French historian Pierre de Coubertin had an idea – let’s foster international relations through sport – and thus the modern Olympics, based on the original Greek competitions, were born.

Some elements of the new games were updated from Greek tradition (athletes didn’t have to compete in the nude) while others, sadly, remained par for the course (no women or people of colour allowed).

Still, without de Coubertin’s idea, which thankfully grew more inclusive in short order, we wouldn’t have the all of the things the Olympics are known for today. No, I don’t mean doping investigations and Zika virus concerns. I’m talking brilliant feats of athletic achievement accomplished by some of the world’s greatest sportswomen and men.

To celebrate the 2016 Summer Games we’ve dug deep into Olympics history to find 15 of the most interesting “gold medal facts” you can imagine – nuggets of trivia that will make you the toast of any Olympic party.

1. The Ancient Olympics, carried out in honour of Zeus, ran from at least 776 B.C.-393 A.D. when Roman Emperor Theodosius I, adverse to these pagan antics, snuffed out the Olympic flame for a millennia and a half.

2. The philosopher Plato didn’t just sit around thinking all day. He actually competed in the Ancient Olympics in the wrestling/boxing hybrid sport of Pankration, something of a forerunner to today’s Mixed Martial Arts (MMA).

3. Not all that glitters is gold. At the first modern Olympic games the winners received silver medals while second place received bronze and third place presumably received a grunt and a look of disappointment from their coach.

4. Though the modern Olympics were created to foster international relations, inter-gender relations weren’t as high a priority. Female competitors were banned from competition, though one Greek woman named Stamata Revithi ran the marathon course on her own and had witnesses provide written corroboration of her start time and location and also her arrival at the finish.

5. The turn of the century brought some progress as women were finally allowed to compete in the Olympics in 1900 in Paris, as was the first black athlete, French rugby player Constantin Henriquez de Zubiera.

6. A number of Olympic sports that appeared in various instalments of the modern games have been discontinued, though some are harder to believe than others, such as tug of war, pistol duels, deer and pigeon shooting and literature and art competitions. Yes, literature and art.

7. Two people in history have medalled in both a sport and an art competition. American Walter Winans won gold in both deer shooting (1908) and sculpture (1912) while Alfréd Hajós of Hungary took home gold in swimming (1896) and a silver in architecture (1924).

8. Sweden’s Oscar Swahn holds the record for oldest summer Olympian ever when he competed in the sport of shooting at the 1920 Olympics in Antwerp, Belgium at age 72. He won silver, making him the oldest medalist in the Games’ history and, at the 1912 Olympics in Stockholm, Sweden, he became the oldest gold medalist in history when he won for shooting at age 64.

10. American swimmer Michael Phelps’ 22 medals (18 gold) give him the greatest overall medal haul by a single person in Olympics history.

11. Athletics, cycling, fencing, gymnastics and swimming are the only sports to have occurred in every Summer Olympics in the modern age.

12. Bangladesh is the most populous country to have never won a medal at the Summer Olympics.

13. Whether through an athlete competing under the nation’s flag, or someone born in one nation but competing for another, only five countries have fielded competitors at every Summer Olympics: Australia, France, Great Britain, Greece and Switzerland.

14. Kosovo and South Sudan are sending teams to the Olympics for the first time in 2016.

15. The Rio Olympics are also the first summer Olympics be held in South America and the first to take place during the host country’s winter season.