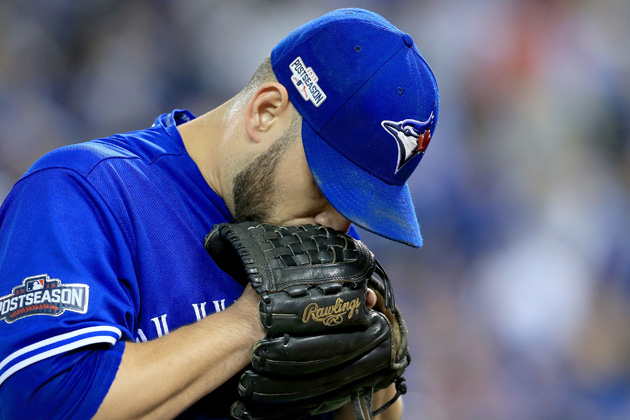 For a team built around timely hitting and homerun power, the Toronto Blue Jays’ World Series dreams ended last night with barely a whimper, as the team bowed out of the post-season with a 3-0 flame-out to the Cleveland Indians.

The loss finished off the Jays for another year, leaving fans wondering where it all went wrong and what changes will take place in the upcoming off-season.

The Jays’ Game 5 loss against Cleveland was eerily similar to last year’s post-season loss to the Kanas City Royals: the batting was meek, the homeruns were non-existent and the ability to hit with runners in scoring position was historically pathetic. Josh Donaldson, Jose Bautista, Edwin Encarnacion and Troy Tulowitzki failed to generate any offence against a depleted Cleveland pitching staff that was there for the taking. The Jays unheralded starting pitchers and bullpen held up their end of the bargain—it was the highly paid batters who couldn’t get it done.

After back-to-back American League Championship Series losses, it’s become clear that that Jays, as they’re currently structured, are incapable of winning the big one. Whether GM Ross Atkins takes this to heart and decides to blow up the entire lineup or, instead, decides to minor changes in the offseason is a big question. However, it’s almost certain that three of the most popular players of the last few years will not return for the 2017 season.

Jose Bautista: It goes without saying that free agent Bautista will not be back in a Blue Jays uniform next year. The slugger battled through injuries all year and never regained the fearsome power stroke that made him the scourge of pitching staffs. Although his homerun power, fielding skills, throwing arm and speed have all greatly diminished, his mouth keeps running at it’s usual rate. Bautista’s pre-game comments that young pitcher Ryan Merrit would be “shaking in his boots” before Game 5 seemed to stoke the hurler, who shut out the Jays for four innings.

Edwin Encarnacion: Another free agent whose days in Toronto are likely numbered. Although he said the right things (“I like the team. I like the fans. I like everything about the city. This is my first choice. But to be honest, my head isn’t going to be into this until after the World Series ends.”), it’s hard to imagine the team throwing huge dollars towards a one-dimensional player whose best years may be behind him.

John Gibbons: While Jose and Edwin may flee, the Jays manager Gibbons will back, as announced last night by GM Atkins: “The one that is certain is our desire for him to continue to lead this organization on the field, and his desire is the same.” While Gibby may not be highly regarded in baseball circles, he’s honest, entertaining and extremely popular with players and fans alike.