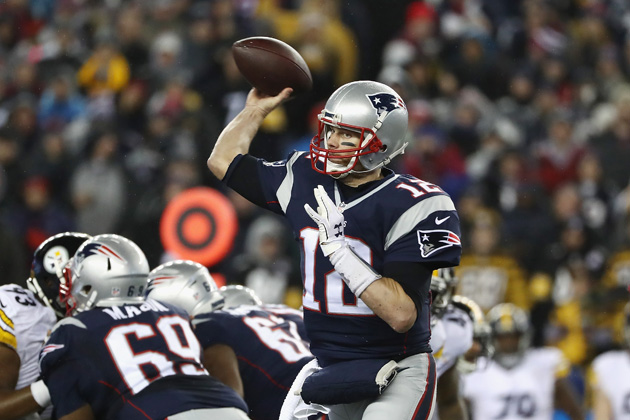 The ridiculously charmed life of Tom Brady might get even sweeter this Sunday if the 39-year-old quarterbacking legend can lead his New England Patriots to a Super Bowl victory over the Atlanta Falcons.

A victory in Sunday’s big game would give Brady five Super Bowls wins. Five! Some of the greatest quarterbacks in NFL history (Dan Marino, Jim Kelly, Dan Fouts, etc.) went their whole careers without capturing a single ring. But now Brady has a chance to set the record—one he currently shares with San Fransisco 49er Joe Montana and Pittsburgh Steeler Terry Bradshaw.

Brady’s playing just as well in his 17th season as he did during his first, and the 39-year-old wonder has accomplished just about everything an NFL player could hope for—winning multiple championships, setting all the passing records, earning a guaranteed spot in the NFL Hall of Fame, making millions of dollars, becoming a legend in Boston, marrying a spectacularly beautiful supermodel and having two great-looking kids.

Perhaps most importantly, Brady has been able to make it this far without suffering the devastating brain injury that cripples many current and former players.

The only blemish on his career was the DeflateGate scandal, which resulted in a four-game suspension earlier this year. (It’s a long story, but the NFL found that Brady ordered ballboys to let the air out of footballs, which supposedly provided him with an edge over the opposing quarterbacks in games played in inclement weather.)

But he put that embarrassing and undeserved suspension behind him and, upon his return, had one of his greatest passing seasons ever, statistically speaking.

Now, all that’s left is for him to cap it off with another Super Bowl—which isn’t a sure bet.

While New England is a three-point favourite over Atlanta, the Falcons will pose a stiff challenge for Brady. Under Dan Quinn, they’re a well-coached outfit, led by Matt Ryan—by most accounts the best quarterback in the league—two excellent receivers in Julio Jones and Mohamed Sanu Sr., and a sturdy, if underrated, defence.

Here’s a list of Brady’s Super Bowl records going into the big game against Atlanta.