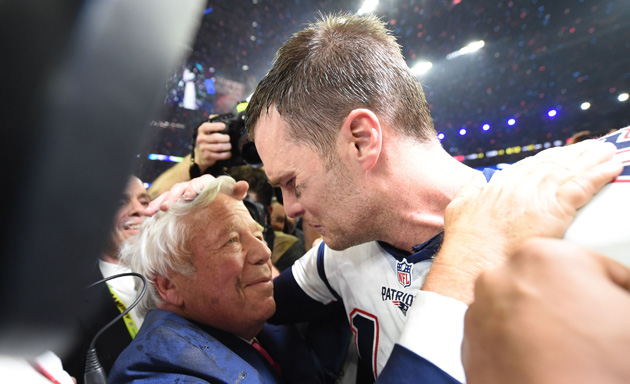 Last night’s Super Bowl comeback was one for the ages—and it was orchestrated by three people who absolutely refused to let age get in the way of their accomplishments.

While the whole New England Patriots’ team contributed to the miraculous 34-28 overtime victory over the Atlanta Falcons, the final result was largely due to three people: Tom Brady, the star quarterback who led the amazing comeback, Bill Belichick, who kept the players focused despite the large deficit, and Robert Kraft, the team owner who made it all work from up on high.

Tom Brady, 39: Although young by ordinary standards, Brady is the oldest position player in the entire NFL. After a sub-par first half in which the Patriots fell behind 21-3, the obvious storyline was that the aging quarterback just didn’t have it in him anymore. But Brady would have none of that, taking the team on his shoulders, leading his team to the greatest comeback in Super Bowl history and setting the record for passing yards on his way to earning the game’s MVP—not to mention his record fifth championship ring. Can Brady play until he’s 40? 45? Anything is possible with this legend.

Bill Belichick, 64: Perhaps the greatest football coach of all time, Belichick looked like he’d run out of answers as his Patriots fell behind by 25 points early in the game. Still, the Patriots’ supreme leader never wavered, never stopped coaching and never stopped believing in his charges. “We never really flinched even when the score was against us,” he said after the game, in his matter-of-fact way. He kept his players mentally in the game and made key second-half adjustments that completely turned the match around. It’s not only the in-game management that makes Belichick great, but it’s his selection of talent, brilliant game plans, hard work and maniacal attention to detail that gives this team an unparalleled advantage over the opposition.

Robert Kraft, 75: The camera often catches the Patriots’ longtime owner in his private box, surrounded by rich people sipping wine and cheering his team on. But Kraft deserves credit for providing the stability and resources to allow his genius coach and star quarterback to succeed. Perhaps most importantly, unlike other owners, he refuses to meddle in the team’s success, allowing Brady and Belichick to work their winning magic year-after-year.