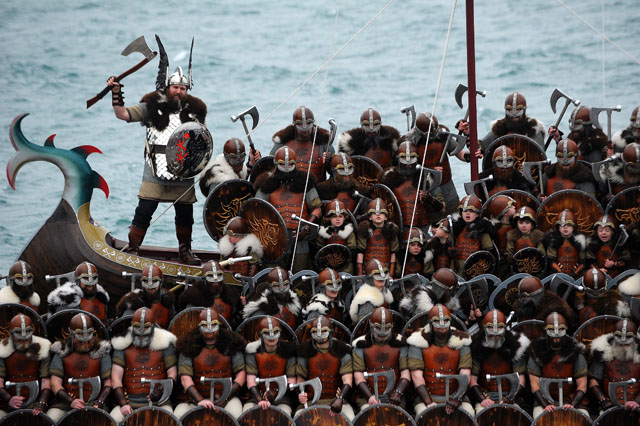 Canadian sports fans are in shock and Canada 150 celebrations have been thrown into a state of turmoil after a recent archeological discovery determined that hockey, a centrepiece of our cultural and national identity, wasn’t invented in Canada but rather brought here by Vikings from Denmark, who landed in northern Newfoundland more than a thousand years ago.

The discovery of primitive hockey equipment – sticks carved from local timber, animal-skin boots with a unique sole perfect for navigating icy surfaces and a clump of congealed animal fat (likely caribou) used a puck – by the Canadian Association of Archaeological Studies (CAAS) near the famed Viking settlement in L’Anse aux Meadows, NFLD, along with stone carvings that appear to list a version of hockey rules, brought researchers to the surprising conclusion.

“As an archaeologist, this discovery is a thrill but, as a Canadian, it’s pretty demoralizing,” said George Alexander, who spearheaded the CAAS dig, when briefing media early Friday. “The evidence suggests that, while the Vikings enjoyed exploring and pillaging, they also appreciated a solid wrist shot.”

Judith Van Huskersen, a Norse language expert at the Canadian School of International Languages and Translation (CSOILAT), explained that, “the Vikings called the game ‘Slaapenfatteen,’ which loosely translates to ‘slap the fat around, which explains the congealed animal fat that was slapped between designated posts at either end of an icy surface with these sticks.” She added that it appears the game strategy involved the entire offensive team rushing the opposing zone, crushing their opponents like unarmed British villagers in a coastal English town before scoring an easy goal, virtually nullifying any attempt at a neutral zone trap. Remnants of a flaming pit near the dig site suggest a makeshift penalty box, giving new meaning to the words “penalty kill.”

Needless to say, the news put a damper on hockey-themed Canada 150 celebrations. Canadian NHL franchises suspended planned sesquicentennial celebrations, including the Vancouver Canucks, who’d previously hoped to win at least two games in a row this season to mark the milestone. Doug Richard, president of the fan-led Alliance for Preserving and Honouring Canada’s Hockey Roots and Traditions (AFPAHCHRAT), said the discovery, “is like being a fan of the Ottawa Senators and watching them make the playoffs. You’re on a high until you find out you’re playing the Toronto Maple Leafs in the first round and then, just like that, it’s all over.”

It didn’t take long, however, for national sorrow to turn to anti-Denmark anger late yesterday. A number of cafes and coffee shops refusing to sell Danish pastries while animal shelters report a drop in adoptions of Great Dane dogs. The right-wing group Coalition for Canadian People’s Identity called for a public burning of all Hans Christian Andersen and Søren Kierkegaard books while members of the even further right-wing group People’s Coalition for Canadian Identity mistakenly launched a coordinated attack on various Ikea stores before authorities explained the difference between Denmark and Sweden.

“Let the Canadians throw their tantrums. This is a great day for Danish hockey,” said Arne Jensen, president of the Denmark and Greater Scandinavian International Association of Ice Hockey Players, Personnel, Historians and Representatives (DAGSIAOIHPPHAR). “For too long Canadians have relegated us to being a nation of nursery rhymes and succulent pastries. Well, this is a Danish offering that Canadians won’t find as delicious and sweet to swallow.”