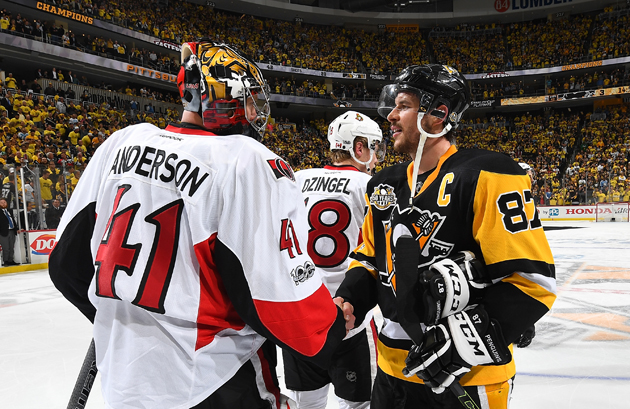 And, as Chris Kunitz’s agonizingly slow shot fluttered over goalie Craig Anderson’s shoulder and the rest of his fellow teammates slumped to the ice, not only did it spell the end of a plucky playoff run by the Ottawa Senators against the Pittsburgh Penguins but it also ended any chances that a Canadian club would win the Stanley Cup.

The fact that the outmatched Senators were still around for a Game 7 against the Stanley Cup champion Penguins was a major surprise in itself. That they took the champs to double overtime was a minor miracle, considering how outplayed they’d been for much of the series. But a staunch defensive system set up by coach Guy Boucher, some scintillating goaltending by Anderson and timely goals kept the Sens’ dream alive.

But, as so often happens in sports, the dream ended with a reality check. The Penguins—with Sidney Crosby, Evgeni Malkin, Phil Kessel et al.—had just too many scoring options. And even when the big three are shut down, Kunitz—at 37, the oldest player on the ice—comes through with two goals, including the OT winner.

Great as he played throughout the postseason, super defenseman Erik Karlsson could only do so much.

Talking to reporters after the game, Karlsson was gracious in defeat. “We lost to a better team. We did everything in our power and it could have gone either way. They did it for a little bit longer than we did and a little bit better. We played the best team in the league and we gave them a good match.”

It was a great run for the city of Ottawa as well as fans across the country who yearn for the Cup to return to Canadian soil. The last time that happened was in 1993, when the Montreal Canadiens defeated the Los Angeles Kings.

This year, the trophy will go to either the Nashville Predators or return to Pittsburgh. The Canadian dream will have to wait another year.