Penguins Repeat As Cup Champs: Crosby and Team Just Know How to Win 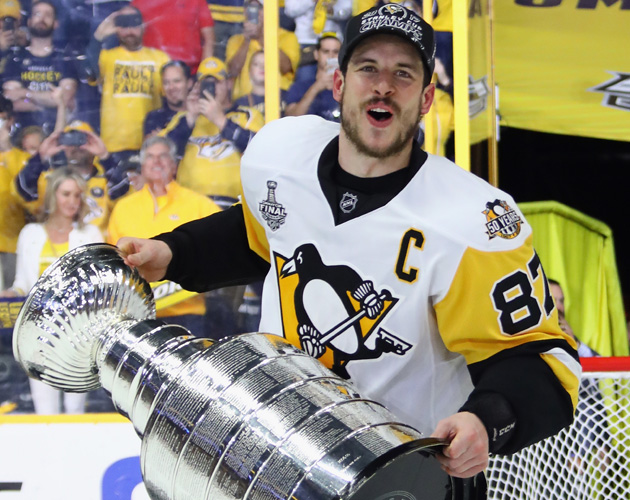 Ho-hum, the Pittsburgh Penguins won another Stanley Cup last night, defeating the plucky Nashville Predators with a last-minute goal. Should we really be surprised that a team loaded with top-end stars, like ridiculously intense Sidney Crosby and the almost unstoppable Evgeni Malkin not to mention sharp-shooters like Phil Kessel and Jake Guentzel, has now won two consecutive league titles?

Yet even with all that marquee talent, this year’s victory was no walk in the park. While Sid the Kid was superb, winning his third Cup and his second Conn Smythe Trophy (for playoff MVP) and Malkin led the playoffs in scoring, the Penguins could not have repetated as champions without massive, but largely unheralded contributions from their oft-overlooked defence corps.

Before the playoffs, experts felt that the team’s no-name defense—Ian Cole, Justin Schulz, Trevor Daley Brian Doumilin, Olli Matta and Ron Hainsey—was a huge weakness and would break down against superior offensive teams. And when No. 1 blueliner Chris Letang suffered a neck injury that put him out for the season, few people thought Pittsburgh had a chance of winning with that shoddy bunch.

However, this band of misfits and castoffs somehow managed to raise their level of play and shut down the big offensive teams. Not only that, but in the Finals, they somehow managed to outplay Nashville’s vaunted blueline corps, led by PK Subban et al. Blocking shots, killing penalties, stifling top scorers, the MVP of this team was really its the defence.

“I think we just had a group of guys that understood big moments and knew how to find ways to win,” said Crosby after the game, obviously giving a shout-out to his defence corps, which didn’t get the accolades, but gutted out a victory.

So when fans look back at the 2017 Stanley Cup, they’ll remember the great fans of Nashville, Patric Hornqvist’s last-minute game winner, Sid’s magnificent play and Malkin’s dramatic goals. Few, however will recall the all-important role played by the anonymous defencemen.

And that’s a shame, because they were the real playoff MVPs.