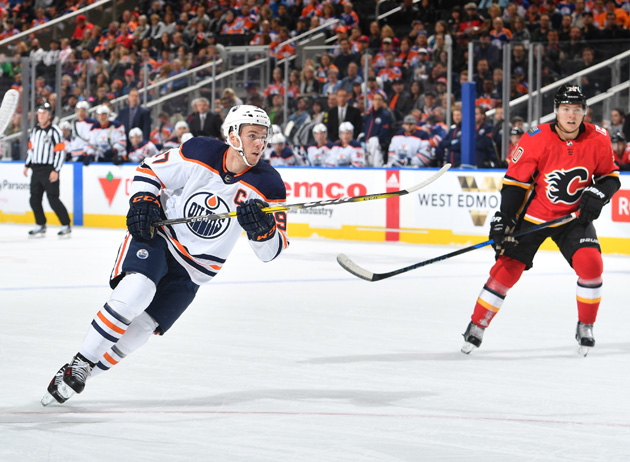 As the puck drops tonight to open the 2017-18 NHL season, let’s take a look at how the seven Canadian teams stack up against the rest of the league.

For the first time in decades, the perennially cellar-dwelling Toronto Maple Leafs and the Edmonton Oilers have the best chance to bring the Stanley Cup back north of the border for the first time since the Montreal Canadiens did it in 1993. But by far the best news out of the preseason is that the seemingly ageless Jaromir Jagr will lace up the skates for yet another year: the 45-year-old wonder (and EZ’s favourite player) has signed a one-year deal with the Calgary Flames.

Look, I just tell my cat, there is a chance to play in NHL this year. 😀😀😀 pic.twitter.com/8iBoTYeEl7

Using the opening odds in Vegas, let’s chart each club’s chances of returning the Cup to Canadians soil Edmonton Oilers This is a young team very much on the rise. Led by the one-two punch of scoring leader Connor McDavid and sniper Leon Draisaitl, the Oilers have enough offensive firepower. But their defence corps is just average and goaltender Cam Talbot has far too many off-nights.

Toronto Maple Leafs Rookie-of-the-year Auston Matthews! Exciting forwards like Mitch Marner and William Nylander! Top Coach Mike Babcock! – fans in Toronto have convinced themselves that the Leafs are legitimate Stanley Cup threats this year. Before they go out and plan the parade route, however, fans should realize that despite great coaching and offensive upside, this team is exceedingly thin on defence and goalie Frederik Andersen hasn’t proven he can win in the playoffs yet.

Montreal Canadiens Two years ago, The Habs were a club very much on the upswing. Then, after a series of baffling moves by GM Marc Bergevin (trading PK Subban and failing to sign Alexander Radulov), the team seems on the road to nowhere. Trading for Jonathan Drouin, the first bona fide French Canadian star forward in years, will boost the power play but won’t mask the fact that the team is seriously lacking in scoring and on the blueline.

Calgary Flames Even with the aforementioned Jagr, the Flames will struggle this season. They do have some talent up front with Johnny Gaudreau and Sean Monahan, but are thin on defence. Their ultimate downfall will be in goal, as veteran Mike Smith is no longer capable of carrying a heavy load.

Ottawa Senators Sens fans are hoping they can build on last years surprising playoff run. Led by superstar defenceman Erik Karlsson and a few nifty forwards, the team largely succeeded by timely scoring, good fortune and building a defensive wall around goaltender Craig Anderson. Unfortunately, it’s an extremely demanding style of play and one that few teams are able to reproduce two years in a row.

Winnipeg Jets The Jets always seem to have the same team, featuring a good crop of offensive-minded players (Finnish sniper Patrik Laine, Nikolaj Ehlers and Mark Scheifele) and a solid defense, with Dustin Byfuglien. But consistently weak goaltending (this year it’s Steve Mason turn to stink out the joint) and lack of depth mean they’re never – ever – a serious contender. Which is shame for Jets fans, among the loudest and most faithful in the league.

Vancouver Canucks It’s not a good sign when your best players are Henrik and Daniel Sedin. While each is capable of putting up points, they’re both 37, with their best days behind them. This team is in full rebuild and the only reason to watch is to see how their young players develop.