Can the Winnipeg Jets Rediscover Their Mojo in Time for Game 7? 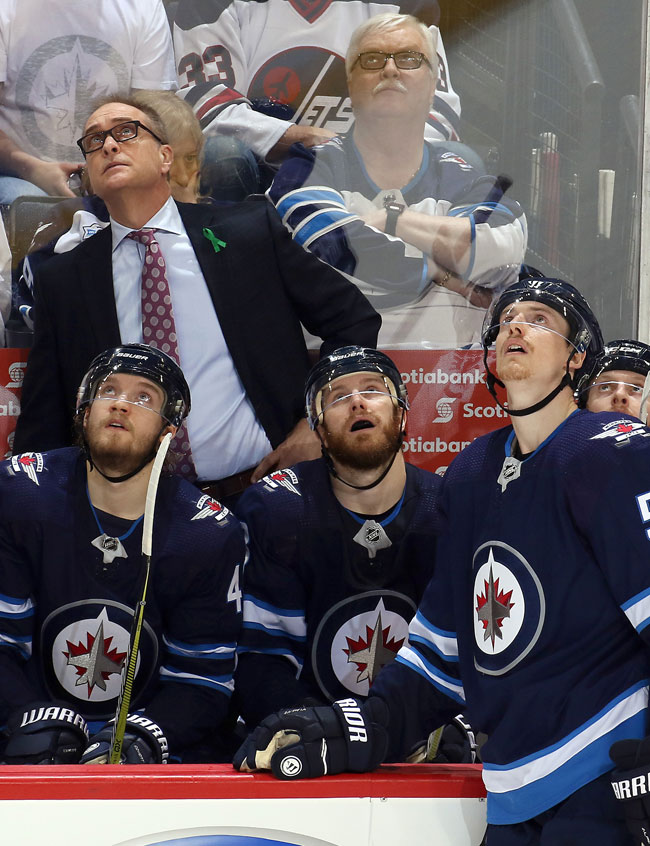 Winnipeg Jets coach Paul Maurice and players look for answers after losing 4-0 in Game 6 against the Nashville Predators. (Photo by Jonathan Kozub/NHLI via Getty Images)

The Winnipeg Jets had everything going in their favour entering last night’s game against the Nashville Predators.

They had a one-game lead. Their stars were firing on all cylinders. They were playing in front of a raucously loud arena of white-clad fans. On the verge of clinching their first trip to the Conference finals. The last Canadian team standing, they had the attention of the whole country.

And they even had hometown music hero Burton Cummings promising in the pre-game introduction to sing the national anthem in the Stanley Cup finals.

And then they went out and laid an egg.

In losing 4-0 to the Predators, the Jets submitted a strangely listless performance, punctuated with missed opportunities, shoddy defence, questionable goaltending and an impotent powerplay.

The final score didn’t do justice to what happened on the ice. The so-called killer instinct – dispatching your opponent when you have the chance – was sorely missing. They gave the Preds a lifeline, a huge mistake on the veteran, talent-laden team.

Now the Jets have to somehow rebound from this dismal effort and capture a win-or-go-home game 7 on the road in Nashville.

A worrying subplot of last night’s game was the disappearance of young Finnish sniper Patrik Laine. He must amp up his game, especially on the power play, if the Jets have any hope of winning in Nashville.

Game 7 will be played on Thursday night at 8 pm ET.