What Are The Odds? Vegas Golden Knights’ Hot Streak Takes Them To Stanley Cup Finals 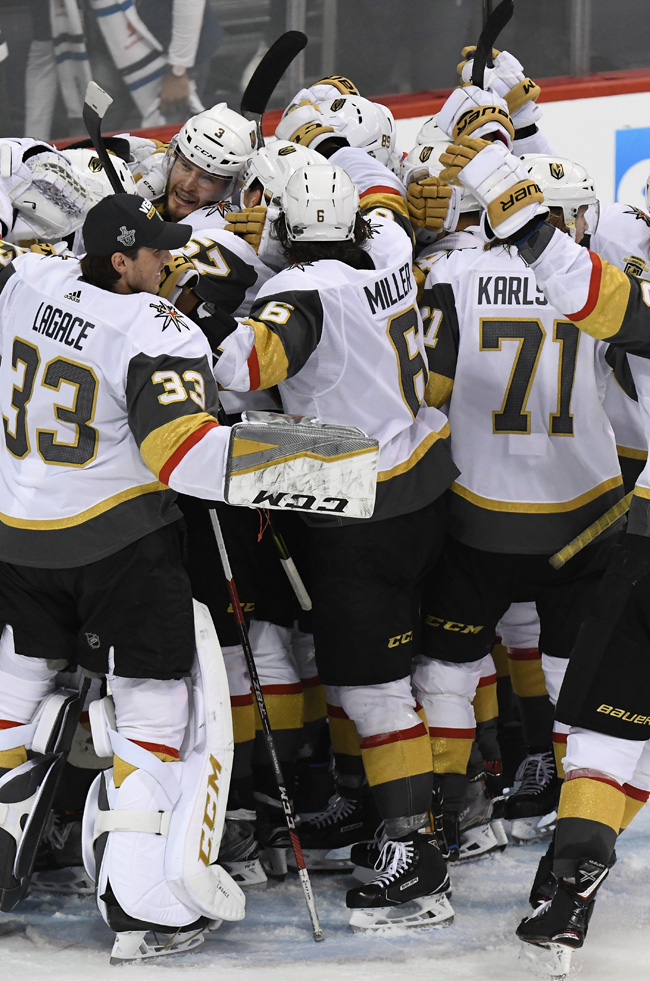 The Vegas Golden Knights celebrate their 2-1 victory over the Winnipeg Jets in Game Five of the Western Conference Finals. Photo: David Lipnowski/Getty Images.

After defeating the Winnipeg Jets 2-1 on Sunday, the Vegas Golden Knights have punched their ticket to the Stanley Cup Finals.

Let that sentence sink in for a bit.

A first-year expansion franchise composed entirely of cast-offs from other teams playing in a town that had barely heard of the sport before last year actually has a good chance to achieve one of sports’ most difficult accomplishments and win the Stanley Cup.

The Golden Knights’ inexplicable Cinderella story begins and ends in net, with veteran goaltender Marc-André Fleury playing out of his mind. A Stanley Cup-winner with the Pittsburgh Penguins, Fleury was dumped in favour of a younger goalie. Playing with a chip on his shoulder, his play has been nothing short of amazing.

And as Fleury’s hot streak continues and he stops everything thrown at him, the team of no-name forwards in front of him — William Karlsson, Jonathan Marchessault, James Neal and Alex Tuch — chip in with timely goals. Karlsson, who has developed into a legitimate sniper, jokingly calls the team the “Golden Misfits.”

The whole team ended up in Vegas because no other NHL team wanted them. That includes coach Gerard Gallant, the 54-year-old Prince Edward Islander, who was unceremoniously fired by the Florida Panthers before becoming the “perfect coach” for the fledgling Knights.

Absolutely no one saw this coming. Not the hockey experts, not the most optimistic fans, not the team management and, least of all, not the players themselves.  In fact, many fans secretly despised the Knights for their gaudy uniforms, neophyte fans and ridiculous pre-game ceremonies and wrote them off as a joke.

The Vegas bookmakers thought so little of the Golden Knights’ chances that the team started the season with the longest odds to win the Cup (they began the year as 500-1 longshots at some Vegas sportsbooks). And when their opening game was set for days after the massive Las Vegas shooting which left 58 dead, everyone thought they’d be forgotten by fans in a city that had no hockey history.

But, after the shooting, the Knights immersed themselves in the community, and quickly became a rallying point for the wounded town. One local columnist  credits the team’s response to the tragedy as the lynchpin that helped the hockey team make inroads into the community – “The faithful bond between Southern Nevada and the Golden Knights was born.”

After roaring through one of the best regular seasons, the Knights continued their hot streak in the playoffs, dispatching the Los Angeles Kings in 4 games, the San Jose Sharks in 6 and, most recently, the Winnipeg Jets (boooo!) in 5.

They’ve become the toast of the town, drawing local celebrities to crank the air-raid siren before games. Most recently, 76-year-old legend Wayne Newton — Mr. Las Vegas himself — sent the crowd at T Mobile Arena into a frenzy after taking his turn at the siren.

Watching this team of misfits has taken the city — and the hockey world — by storm has been nothing short of astounding. And despite their success, no one wants to give them credit for their amazing success so far and few think they’ll win the Stanley Cup.

But just like a gambler on a hot streak at the tables, the Vegas Golden Knights are on an improbable, yet magical roll. And if they somehow parlay this success into winniing four more games – and take home the Stanley Cup – you can be sure the celebrations in Vegas will be epic.

While Vegas may not know much about hockey, one thing this town does know is how to throw a party.