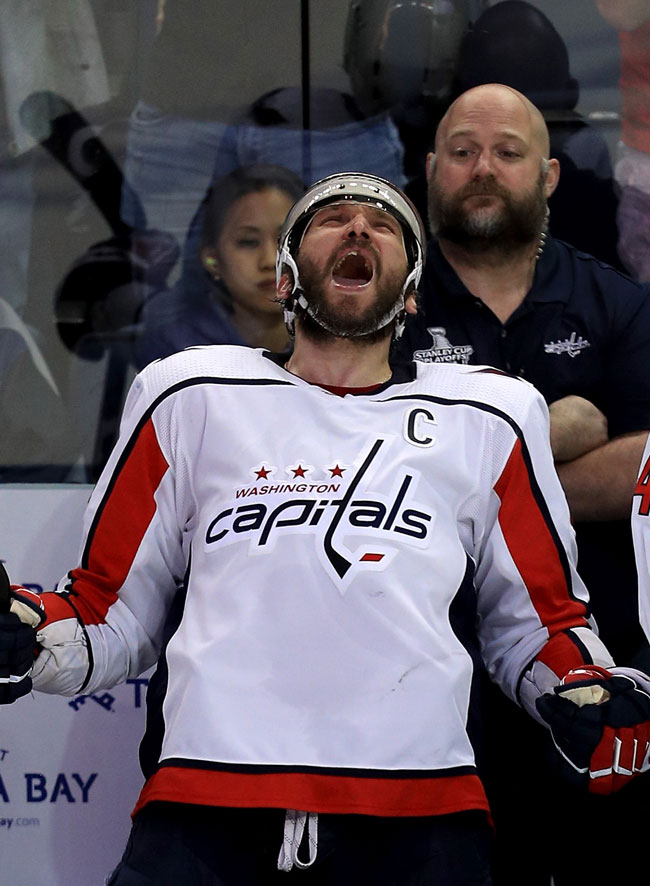 After years of spectacular playoff failure, Alex Ovechkin and the Washington Capitals have finally secured a place in the Stanley Cup Finals.

Ovechkin, who has been dogged by criticisms that he’s unable to lead his team to a title, continued to play like a man whose driving passion is to prove those critics wrong. The 32-year-old Russian scored the game’s first goal and, combined with his usual physically robust game, led the team to a 4-0 win over the Tampa Bay Lightning.

While his teams have always enjoyed great regular season success, Ovechkin has never been to the Finals before. Over the course of their parallel careers, Sidney Crosby, the cool, quiet leader, has led his Pittsburgh Penguins to three titles — before this year Ovechkin, the colourful and boisterous one, has never even advanced past the second round. While the Capitals have always been on the cusp of success, their playoffs have inevitably ended in heartbreaking fashion, often to the Crosby-led Penguins.

The repeated failures has led to speculation that, while Ovi might be this generation’s greatest goal scorer, he lacks the intensity and will-to-win that playoff hockey demands. After the failures piled up, the whispers grew louder that while he could light the lamp like no one else, he just didn’t have the leadership intangibles that Crosby always brings to his playoff teams.

It’s a certainty that this has a motivating factor not only in Ovi’s subperb playoff performance this year but also his evident relief when the Capitals finally beat the Penguins, their long-time nemesis, in a playoff series.

While it’s entirely expected that the he leads his team in goals with 14, it’s his contributions on defence — even blocking shots — that has won him accolades from his coach, teammates and fans. “I think Ovie has been on a mission,” Capitals coach Barry Trotz said after the clinching victory.

Even though Ovechkin is getting so close he can almost taste the champagne, he’s not getting ahead of himself. The only team that lies between Ovechkin and his first Stanley Cup is the upstart Vegas Golden Knights. The Knights are on an incredible roll and not one team has figured out how to beat them. These Nevada misfits are not a team to be taken lightly.

Having made it this far, Ovechkin won’t underestimate his opponents, at least not according to the comments the emotional Russian made after winning Game 7 against Tampa. “I think everybody is happy, but we still have unfinished — you know what I mean.”

Yes, Ovi, we know what you mean.