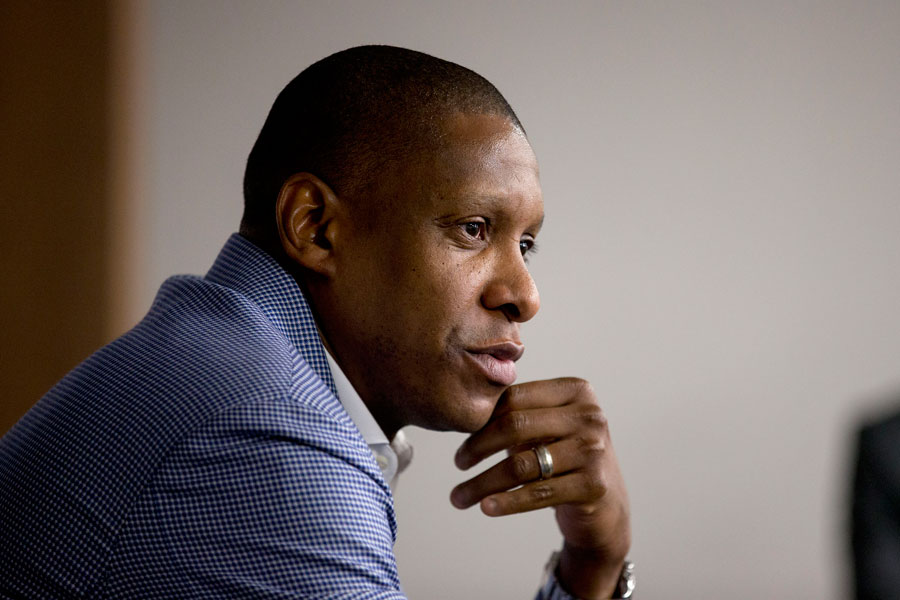 Raptors’ President Masai Ujiri was on hand at Scotiabank Arena to discuss the blockbuster trade he made for Kawhi Leonard.

Raptors fans and media alike finally got a chance to hear from Raptors’ President Masai Ujiri at a press conference on Friday, after he pulled off the biggest trade in franchise history.

The multi-player trade, which has drawn both praise and criticism since it was finalized on Wednesday, sent franchise player DeMar DeRozan to the San Antonio Spurs in exchange for superstar Kawhi Leonard.

Chief among the concerns surrounding the trade is the possibility that Leonard will leave Toronto for his desired destination of Los Angeles once he becomes a free agent next offseason. Ujiri, however, seems confident that the Raptors’ courting period of one season will be enough to convince the superstar to stay.

“I think there’s a lot to sell here; our team, our culture our city, our ownership. We have everything here except a championship,” he said.

Ujiri also addressed DeRozan’s claim that he was promised he wouldn’t be traded. As reports of the possible trade surfaced on Wednesday, DeRozan, who was drafted by the Raptors in 2009, took to social media to tell his fans of his disappointment.

“Be told one thing & the outcome another,” DeRozan posted on Instagram. “Can’t trust em. Ain’t no loyalty in this game. Sell you out quickly for a little bit of nothing … Soon you’ll understand. Don’t disturb.”

To his credit, Ujiri acknowledged a conversation that took place during summer league in Las Vegas that may have given DeRozan a false sense of security.

“I think maybe my mistake was talking about what we expected from him going forward,” Ujiri explained. “I think that’s where the gap was. If there was a miscommunication there I do apologize to DeMar and his family.”

In the same vein, Ujiri talked about taking advantage of the rare opportunity of landing a superstar.

“You can’t continue to do the same thing over and over,” Ujir said. “When you get a chance to get a top five player, you have to jump on it.

Nowhere is that more true than in the NBA, where one player can carry a team to elite status, and possibly a championship.

As for the risks involved, which include Kawhi’s injury and the subsequent rift between him and his former team, Ujiri says they were a catalyst in finalizing the deal.

“Without all this medical drama, we have no chance of talking to a player like that.”

Raptors fans will have to wait a little longer to find out the health status of their new superstar, who will undergo a physical in Toronto in the coming days.