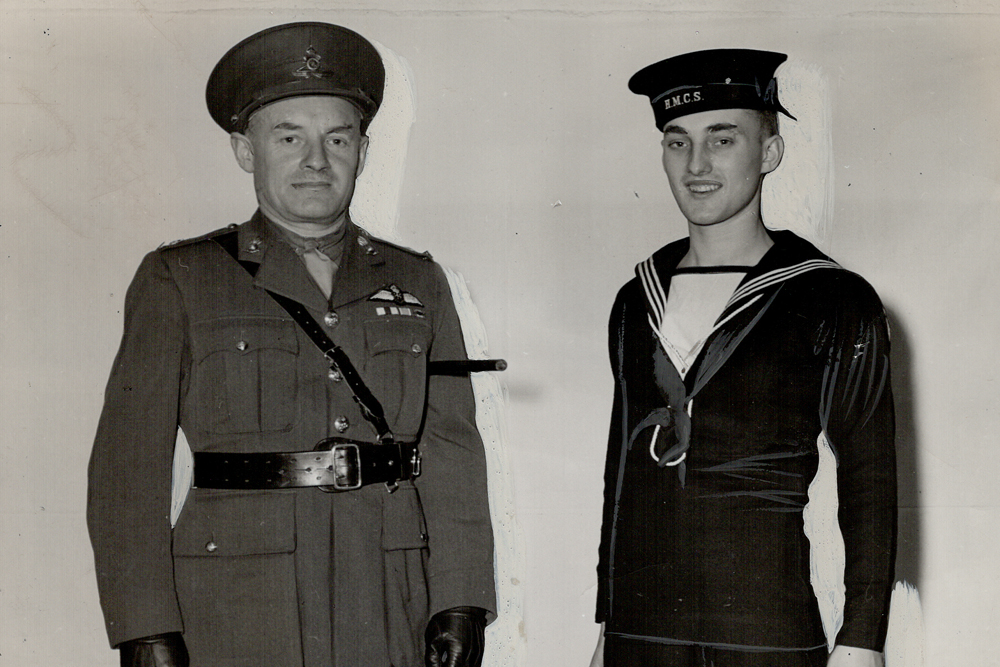 On the two occasions last century when world war broke out, prominent Canadian hockey players answered the call to arms, trading in their sticks and skates for guns and boots, and putting their careers on hold in order to help Britain in her fight against the mighty German armies.

It stands to reason that the sport of hockey – which sometimes resembles armed conflict on ice – would produce so many soldiers, pilots and seaman. This fact was noted by James T. Sutherland, president of the Canadian Amateur Hockey Association, and captain of the 146th Overseas Battalion. In 1915, Sutherland issued a recruiting message that called on hockey players to join the war effort.

“It takes nerve and gameness to play the game of hockey. The same qualities are necessary in the greater game that is now being played in France and on the other fighting fronts.”

Many people connected with the game responded to Sutherland’s message, including Toronto Maple Leaf owner Conn Smythe (above), who joined the air force and was shot down over Germany, spending over two years in a Prisoner of War camp.

Perhaps the most famous hockey player to serve overseas in World War I was the legendary Frank McGee, one of the game’s pre-NHL greats, who won the Stanley Cup four times while playing for the Ottawa Silver Seven. (He famously scored 14 goals against the Dawson City Nuggets in a Stanley Cup-winning game.)

After his career, McGee sought glory on the battlefield, joining the 43rd Regiment – despite the fact he only had one eye. He was killed during the Battle of Flers-Courcelette, part of the huge numbers lost in the Somme Offensive. Along with over 11,000 of his fellow Canadians, McGee’s body was never recovered.

With another long and devastating war underway, hockey players again joined up in droves. NHL lineups were stripped of talent as Hall-of-Fame caliber players like Sid Abel, Syl Apps, Doug Harvey, Hap Day, Tiny Thompson and many others served overseas. This meant the quality of hockey fell off greatly during the early 1040s until the players started returning after the war.

The Boston Bruins, for example, lost their top-scoring trio, as the fabled Kraut Line (Woody Dumart, Bobby Bauer and Milt Schmidt) all enlisted in the Royal Canadian Air Force. Howie Meeker, who would play and coach the Leafs before embarking on a long career as a TV commentator, was injured when a grenade exploded nearby. And Ken Reardon, stalwart defenceman for the Montreal Canadiens, was awarded Field Marshall Montgomery’s Certificate of Merit for acts of bravery during battle.

Even the old World War I vet and hard-core patriot Conn Smythe, at age 45 put his hockey management duties aside and signed on for another tour of duty, this time forming an anti-aircraft battery. He was wounded in France in 1944. Recuperating in a hospital, Smythe created controversy at home with his Globe and Mail article headlined: “Untrained Troops a Hazard at the Front,” which bemoaned the lack of trained recruits the Canada was producing.

Not all Canadian hockey stars who signed up ever saw battle action. Many players were simply enlisted to improve morale, which they accomplished by playing hockey games for the troops overseas.

And because so many good players were available, these games were top-notch, not only entertaining Canadian troops but also introducing Europeans to this fast-paced sport on ice.