As Jim Hughson Retires From ‘Hockey Night in Canada,’ Where Does He Stand Among the Top Hockey Voices of All-Time? 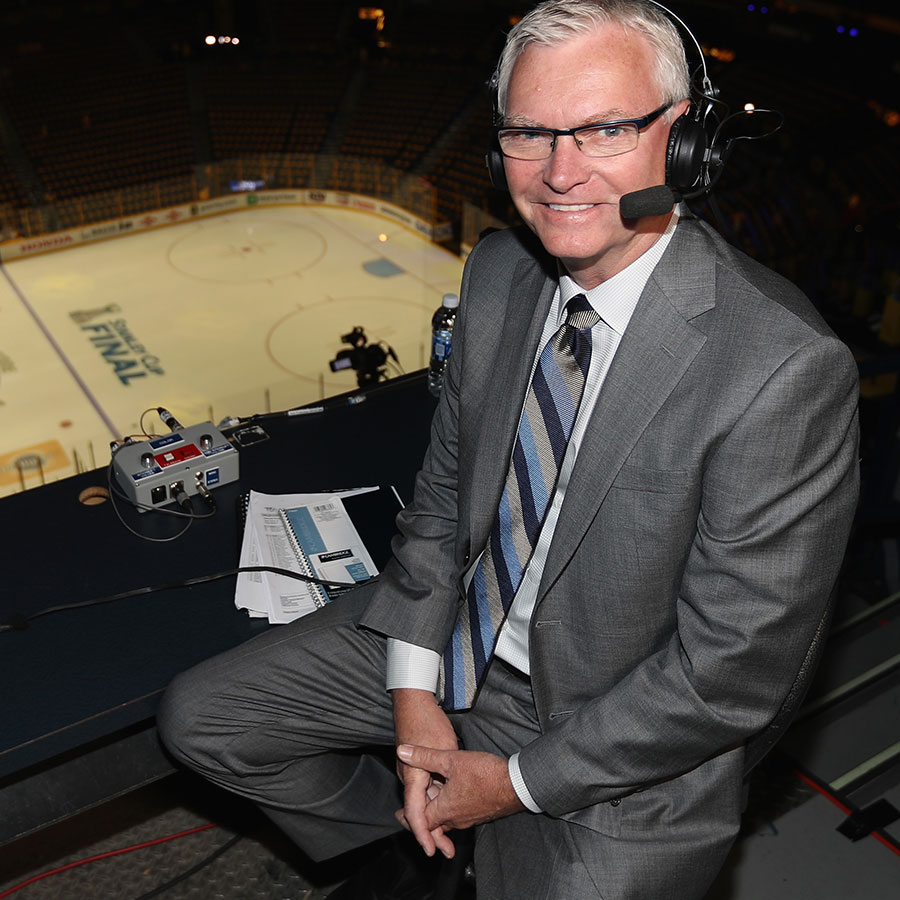 Jim Hughson, seen here prior to calling the third game of the 2017 NHL Stanley Cup Final between the Pittsburgh Penguins and the Nashville Predators, announced his retirement from broadcasting this week. The 64-year-old is considered one of the greatest hockey play-by-play callers in the game's history. Photo: Dave Sandford/NHLI via Getty Images

On Tuesday, Jim Hughson — best known to hockey fans as the voice of Hockey Night in Canada (HNIC) for much of the millennium — announced his plan to retire from the broadcasting booth.

“It’s been an honour, privilege and pleasure to join Canadian hockey fans in watching so many fantastic games over the years,” said the 64-year-old broadcaster in his farewell statement. Hughson will be replaced by Chris Cuthbert in the broadcast booth for HNIC.

A member of the Hockey Hall of Fame, over the course of his career, Hughson’s voice became a familiar soundtrack for HNIC‘s Saturday night telecasts, as well as the go-to caller for all the big games.

But, as Hughson drops his mic, the question arises as to where he ranks on the all-time list of great HNIC broadcasters. Here, we rank the top voices and include some of the calls that made them so special.

Foster Hewitt is, without doubt, the undisputed king of all HNIC broadcasters, largely because he invented the role. Born in Toronto in 1902, Hewitt stands as the first to utter the famous phrase that is still the go-to call for all hockey broadcasters: “He shoots, he scores.” Beginning in 1931, Hewitt was the regular play-by-play man for HNIC on radio, and later TV, until the mid ’60s, at which point he handed his mic over to his son, Bill. During his lengthy run, Hewitt’s squeaky voice could be heard every Saturday night on radios and TVs across the country. His influence and fame ran so deep, that to this day the HNIC broadcasts begin the audio of his famous intro: “Hello, Canada, and hockey fans in the United States and Newfoundland.” While he was there for so many big moments for HNIC over the years — perched high above the ice in his gondola at Maple Leaf Gardens — Hewitt’s most memorable call came in the 1972 Summit Series between Canada and Russia, where he ended his lengthy career with the whole country watching.

A close second to Hewitt in the hearts of many hockey fans, Bob Cole loved to listen to the iconic broadcaster every Saturday night as a youngster growing up in Newfoundland and Labrador. In fact, when he was 23, a nervous Cole paid a visit to Hewitt so that the two could discuss play-by-blay techniques. The visit paid off and, by the late ’60s, Cole was broadcasting hockey on radio and would go on to join HNIC in 1973. He had an enthusiastic yet quirky style and would often get lost in the excitement of the game. When Joe Sakic scored an important goal against the U.S. in the 2002 Olympic Games, an amped-up Cole shouted “Goar!” — a mash-up of goal and score. Over the years, he never lost his passion for the game, and his refusal to become polished and professional endeared him to fans across the country. A Saturday night Leaf game, playoff tilt or big international match didn’t seem quite right unless Cole was presiding over it. Although he was replaced by Hughson as the lead man in 2008, Cole remained part of the HNIC broadcast regular right up until his retirement in 2019 — at the age of 86. He has dozens of memorable calls, but in this call of a magical goal by Mario Lemieux in the 1991 Stanley Cup Finals, he manages to squeeze “Oh my heavens!,” “What a goal!” and “Ohh baby!” all into the same breath.

Fans in Montreal will remember fondly the stylish and witty Gallivan, who called Saturday HNIC games on radio and television from 1952 until his retirement in 1984. A native of Sydney N.S., Gallivan served as a Latin teacher before moving into radio. Alongside his colour man Dick Irvine, Gallivan’s breezy style meant that, unlike Cole, he never got too wrapped up in the action. And his erudite catchphrases — like a “scintillating save” or a “glorious scoring opportunity” or a “cannonading drive” — entertained Montreal’s English-speaking hockey fans during their many Stanley Cup runs over the years. He was once taken to task by an English professor who wrote a letter complaining that there was no such word as “cannonading.” Gallivan wrote back saying, “There is now.” In his famous call of Guy Lafleur scoring an important goal against the Boston Bruins in the 1979 playoffs, Gallivan masterfully senses the moment and remains silent, letting the frenzied fans in the old Montreal Forum tell the story.

Unlike the other names on this list, Hughson was not solely a hockey commentator. In the early ’90s, during the hockey off-season, he served as the television voice of the Toronto Blue Jays, calling all the important regular season games for TSN during those World Series seasons. But hockey was his first love and the Fort St. John, B.C. native began calling Vancouver Canucks games regionally for TSN and later Sportsnet before becoming the lead HNIC play-by-play man in 2008, taking over from Bob Cole. Although Hughson didn’t have any of the idiosyncratic style or malapropisms that made the old-school play-by-play callers beloved, his polished, professional and always smooth delivery, sprinkled in with humour, made him a fixture for all the major NHL playoff and Olympic broadcasts. Younger fans might know him best as the voice of the NHL series of EA Sports video games, a role that cemented his reputation as the “soundtrack” of hockey. While he’s not really associated with any particular call, Hughson was perhaps best known for punctuating every stop made by Canucks’ goalie Roberto Luongo with a phrase that has since become legendary in Vancouver: “Great save, Luongo!”

A familiar voice for B.C. sports fans during the ’50s through to the ’90s, the Prince Albert, Sask., native moved to Vancouver where he eventually assumed duties as radio caller for the CFL’s Lions. In 1970, when the city landed an NHL expansion franchise, Robson was the obvious choice to take over the broadcast booth and over the course of his time there became known simply as “the voice of the Vancouver Canucks.” This included a regular Saturday-night appearance as the voice of HNIC where he covered regional action as well as the Stanley Cup playoffs in 1975, 1980, 1982 and 1994 — the latter two years occurring when the Canucks made a memorable run to the finals. As with all old-school radio men, Robson’s even cadence and workman-like approach to the game reflected the team that, for many years, made up for a dearth of superstars with hard-working players. His most famous call, familiar to all B.C. hockey fans of a certain age, happened when the Canucks won a hard-fought, vicious tilt against the New York Rangers. Team captain Trevor Linden was hit by a high stick late in the game, which set the stage for Robson to utter his epic “He’ll play on crutches!” line.