As the Puck Drops on a New NHL Hockey Season, Will the Stanley Cup Finally Return to Canadian Soil? 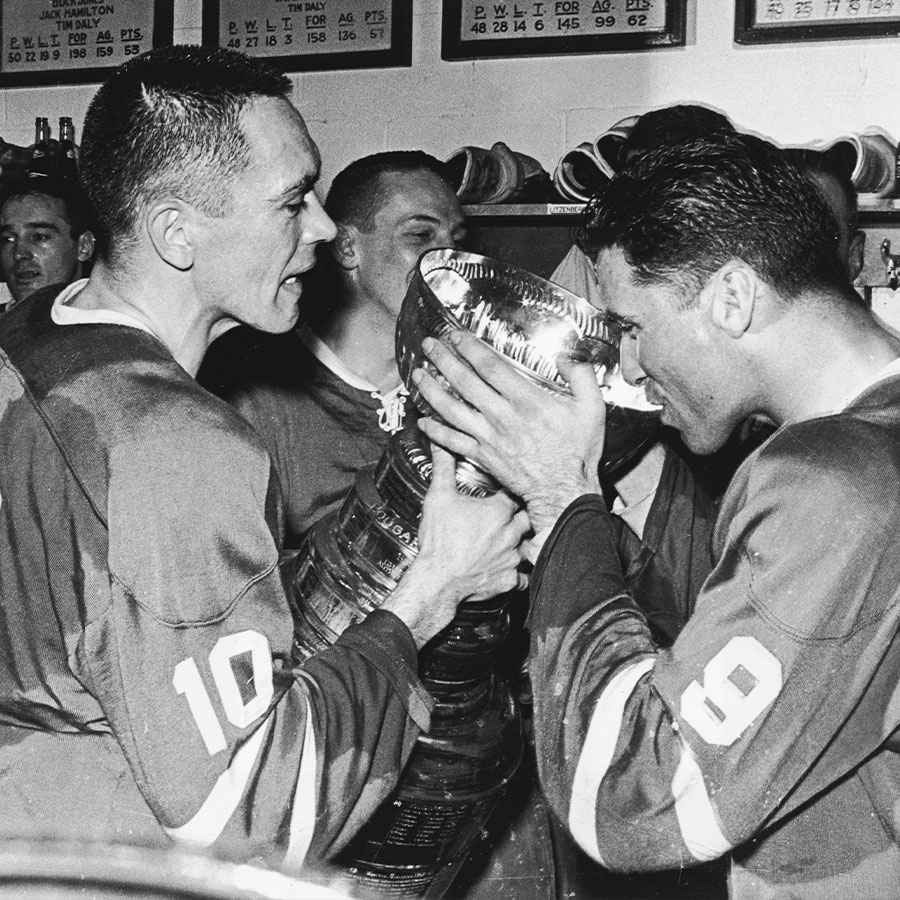 Hockey players George Armstrong #10 (front left), Andy Bathgate #9 (front right), and other members of the victorious Toronto Maple Leafs drink from the Stanley Cup following their defeat of the Detroit Red Wings in game seven in 1964. The question at the beginning of the 2021/2022 campaign is whether a Canadian team be able to hoist the Stanley Cup again this season. Photo: Pictorial Parade / Getty Images

The NHL season began its 2021-2022 season Tuesday night with a game between the expansion Seattle Kraken and the four-year-old Las Vegas Golden Nights.

And while it wasn’t exactly a classic game between two clubs steeped in tradition, the Kraken put in a spirited effort, eventually losing 4-3 to the Knights. Not a bad result for a team built largely on cast-offs and spare parts.

The game itself was really more meaningful than the score, as it marked the return of Seattle to big-league hockey after almost a century. Even our oldest readers won’t remember this, but back in the early part of last century the Emerald City hosted the Seattle Metropolitans — which eventually went bankrupt, but not before winning the Stanley Cup in 1917.

While the Toronto Maple Leafs Stanley Cup drought isn’t as long as Seattle’s, it certainly feels that way to the club’s long-suffering fan base. The Leafs have two dubious streaks that they’d like to put an end to this year — they haven’t won the Cup in 54 long years and haven’t won a playoff series in 17.

Still, it’s not like the other Canadian teams have been piling up championships during the Leafs stretch of futility. The last time a squad north of the border hoisted Lord Stanley was in 1993, a run of failure that hangs heavily on fans in the birthplace of hockey.

With a new season dawning, hope springs eternal. The big change for the upcoming hockey season is that Canadian arenas will once again be filled with fully vaccinated fans — a welcome change to the depressingly empty buildings that were norm last year. But will the return of noisy supporters help propel a Canadian club to Stanley Cup glory? Let’s take a look.

The Leafs opened their season Wednesday with a win against the Montreal Canadiens. The Habs — the last Canadian club to a Cup — were the unlikely authors of Toronto’s latest playoff flop, shocking everyone in Southern Ontario by coming back from a 3-1 series deficit to cancel yet another Stanley Cup parade. (Masochistic Leaf fans can relive the agony all over again by watching All or Nothing, the Amazon Prime series that documents the early season optimism followed by the devastating collapse in full detail.)

While winning the first game of the season against their rivals might provide the Leafs with some measure of revenge, the team is focussing this year on playoff triumphs rather than regular season mastery. Loaded this year with ample firepower (Auston Matthews, John Tavares, Mitch Marner and Willie Nylander), the Leafs have the best chance among all the Canadian clubs to win the Cup. But the loss of gritty fan-favourite Zach Hyman will hurt. And because management is putting all its faith in unproven goalie Jack Campbell, many in the highly cynical Leaf Nation are fearing the worst.

The Canadiens rode their upset of the Leafs last year all the way to the finals, before bowing out to the mighty Tampa Bay Lightning. It’s unlikely the club will emulate last year’s flukey results this year. Star goalie Carey Price, who contributes inordinately to the team’s success, is out for an undetermined time after entering the league’s player assistance program, which helps players battling mental health issues and substance abuse. Rugged defenceman Shea Weber will also be absent from the lineup, sitting out the entire year to recuperate from the many injuries that pile up over the course of a lengthy career. Without the two stars, hockey fans in La Belle Province will have to content themselves with memories of last year’s magical ride. This year, they’ll be lucky to make the playoffs.

The Sens are nearing the end of a lengthy rebuild and they have a roster of highly promising young players to show for it. They are, however, lacking a superstar to carry the weight and a top goalie to cover up for the young, error-prone blueliners. Team owner Eugene Melnyk must also overcome his Scrooge-like tendencies and sign burgeoning star Brady Tkachuk to a new contract. While the Sens are definitely trending in the right direction, they’re not yet ready to win a Cup. Fans in the nation’s capital will have to endure another year out of the playoffs.

Every year, the Jets ice a competent squad that never really gets over the hump. With Connor Hellebuyck providing steady goaltending and Mark Scheifele, Kyle Connor and Blake Wheeler scoring, they’re competitive every night. That’s a recipe for another playoff year, perhaps even a first-round victory. But it seems like this group of players has reached its ceiling and if they’re ever going to take the next step under coach Paul Maurice, they’re going to have to add some high-end talent — which has always been a challenge for this small-market, cash-strapped team.

The season begins, as it has every year since Wayne Gretzky left town, with high expectations. The Oilers has added some heart (Zach Hyman) and experience on the blue line (Duncan Keith) to go with their two superstars, Connor McDavid and Leon Draisaitl. However, the team looks a lot like the Maple Leafs — heavy on top but weak throughout. And with shaky defence and unpredictable goaltending they should make the playoffs, but will be hard-pressed to win a round.

At the end of last year’s disappointing season, the Flames management finally listened to fans and began blowing up the club. Gone are team captain Mark Giordano and Sam Bennett, two veterans who will be missed. While the team will be younger and faster, with more “razzle dazzle,” it’s not likely that they’ll be much better. The big question mark is whether undersized forward Johnny Gaudreau can get along with crusty coach Darryl Sutter and rediscover his scoring magic. If he does, this team might sneak into the playoffs. If not, it’s more than likely this team will go down in … err … flames.

Signing burgeoning superstars like forward Elias Peterson and defenceman Quinn Hughes to long-term contracts signals that the Canucks are ready to shake off the disappointment of the past few years and field a competitive team. While they have a promising base of young talent, the question is whether the whole will be as good as the sum of its parts. Anything less than a playoff spot will be considered a failure by fans. And if they miss the playoffs, which seems a distinct probability, coach Travis Green and general manager Jim Benning will be well advised to begin updating their resumés.

As Jim Hughson Retires From “Hockey Night in Canada,” Where Does He Stand Among the Top Hockey Voices of All-Time?