The Year in Sports: The Brightest Highlights and Most Surprising Moments of 2021 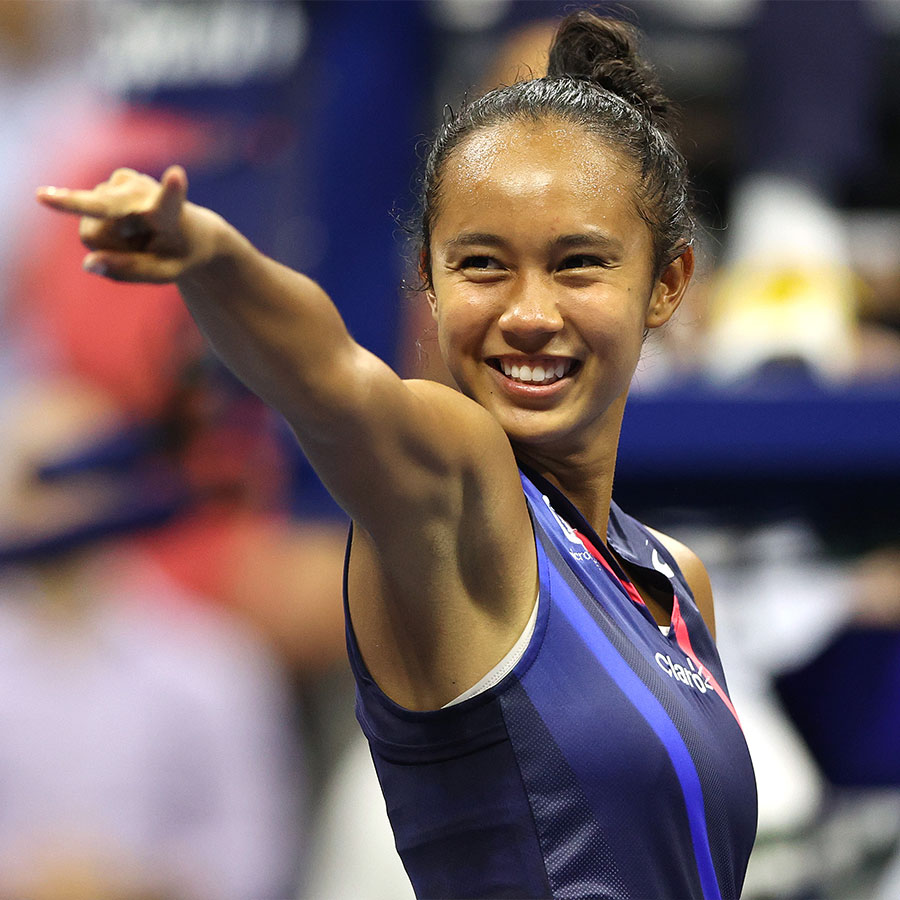 Leylah Annie Fernandez of Canada celebrates defeating Aryna Sabalenka of Belarus during her Women’s Singles semifinals match on Day Eleven of the 2021 US Open on Sept. 9, 2021. Photo: Elsa/Getty Images

As the sporting world struggled to restart in 2021 after being interrupted by COVID-19, here are the top moments of what shaped up to be a very strange year.

One of the most compelling — and easily most surprising — stories of this past sports year was the excellent showing of Canada’s young and rising tennis stars.

The women were led by the indomitable and loveable Leylah Fernandez, whose thrilling run at this year’s U.S. Open, which ended with her losing in the final, captured the nation’s hearts. Fernandez’s strong showing vaulted her in the WTA rankings, from 209 in 2019 all the way up to 24th at the end of this year.

On the men’s side, Félix Auger-Aliassime also served notice that he’s a player to be reckoned with, making it all the way to the quarterfinals of Wimbledon and the semi-finals of the U.S. Open. After his strong year, he’s ranked 11th in the world. Now, if Bianca Andreescu, who won the U.S. Open in 2019, can rediscover her game and Denis Shapovalov can lift his play up a level, this could shape up to be the golden age of tennis in this country.

In February, 43-year-old quarterback Tom Brady stunned the sports world by leading his Tampa Bay Buccaneers to a lopsided 31-9 victory over the Kansas City Chiefs in Super Bowl LV.

Apparently his coach, Bruce Arians, is an adherent to the Brady philosophy. At 68, he became the oldest head coach to ever guide a team to a Super Bowl win.

The Habs Make the Stanley Cup Finals? How Bizarre

The NHL’s pandemic season might go down in history as its strangest one ever. Because of travel restrictions, the seven Canadian teams couldn’t play their U.S. counterparts. To get around this, the league formed a Northern Division, set up so the Canadian clubs would only play a 56-game schedule against each other.

The Vancouver Canucks’ season was basically ruined by a COVID outbreak, which saw most of the team and coaching staff test positive and forced the cancellation of a slew of games. Even more bizarrely, they ended up playing games against the Calgary Flames after the regular season had officially ended!

Perhaps the only normal occurrence of last year was that the Toronto Maple Leafs blew yet another playoff series, this time against the Montreal Canadiens. After the Leafs built a 3-1 lead in the series, Montreal stormed back to win it 4-3, sending Leaf fans home unhappy once again.

Inspired by crushing the dreams of their long-time rivals, the Canadiens defeated the Winnipeg Jets and the Las Vegas Golden Knights, on a magical run that saw them become the first Canadian team since the 2011 Vancouver Canucks to qualify for the Stanley Cup Finals.

Alas, they were no match for the Tampa Bay Lightning, who won their second successive Stanley Cup after dispatching the Habs in five games.

With COVID cases soaring in Japan last summer, there was much talk of cancelling the Tokyo Summer Olympic Games for another year. But by barring fans from attending events and rigorously testing athletes on a daily basis, local organizers managed to stage the first major global sporting event since the pandemic struck.

Once the games got underway, Canadian athletes were able to show their stuff. Our women led the charge, winning medals in 16 events. The combined total of 24 medals represented our best showing since the 1984 Games in Los Angeles.

Besides the women’s soccer team, who won gold, the biggest female star was swimmer Penny Oleskiak, who won three medals in the pool, pushing her career medal total to seven and becoming the most decorated Canadian Olympic athlete of all time.

Andre De Grasse also cemented his place as the next great homegrown track star, inheriting the mantle from Donovan Bailey, winning three track medals this summer, including gold in the 200-metre sprint.

The Boys of Summer Return

The itinerant Toronto Blue Jays returned home to the Rogers Centre in July after playing 2020 and part of 2021 in outposts like Buffalo, NY, and Dunedin, Fla.

They also returned to being a competitive team in the American League East, vying for a playoff spot until the last day of the season. Led by one of the leagues most exciting young hitters — Vladimir Guerrero Jr. — and a young roster brimming with talent and charisma, the Jays showed fans that they will be a playoff threat for years to come.

The fans welcomed back their heroes by flocking to watch their heroes play, bringing a buzz back to the Rogers Centre that has been sorely missing since 2016.

In order to keep the momentum, the Jays will have to fill the gaping holes left by Robbie Ray (this year’s Cy Young Award winner) and Marcus Semien (who set an MLB record for second basemen by clubbing 45 homers), and Steven Matz (the lefty who won 14 games) — all of whom have signed elsewhere as free agents.

After cancelling its entire 2020 season and Grey Cup due to the pandemic, the CFL appeared to be in deep trouble and there were many who felt that the league might never recover from the shutdown.

But in August, the league that refuses to die once again proved the cynics wrong and managed to resume operations, holding a shortened 14-game season.

With some U.S. players deciding not to come north of the border during COVID, the thinned-out talent pool meant play was scrappy and uneven. Still, over one million fans bought tickets for regular season games and the highly entertaining East and West finals playoff games drew over a million viewers. And the CFL capped off its successful return with a thrilling Grey Cup final, which saw the Winnipeg Blue Bombers squeak past the Hamilton Tiger-Cats in overtime.

The Year In Politics: 5 Major Events That Shaped Canada’s Political Landscape in 2021